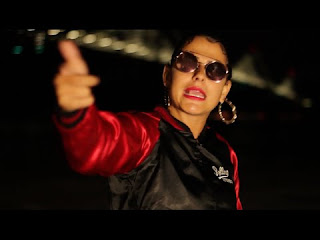 South Brooklyn's own Dama Nilz is back with a new song and video titled "Devito". Known for her authentic "DGAF" attitude and clever bars, Dama doesn't hold back on this one. Clearly expressing how influenced she is by the Late 90s, Early 2000's era of Hip Hop, she pays homage to gangsta classics like The Lox's "Kiss Your Ass Goodbye", 50 Cent's "Heat", and every song since Biggie that used "Bring Em Out".

Devito is produced by Swizz Beatz' Protégé  Avenue Beatz, helped make "Uproar", and "Glory" for Lil Wayne. The video by XienHow (TeamDoneSon), showcases Dama in a real natural element; solo, being some kind of mafia boss. You're not quite sure if you want get "in bed" with the likes of her, because the repercussions of crossing her seem to be frightening. With bars like "They sinking whole Titanic's cause how loose they lips, you might not really learn your lesson til youlose some limbs", Dama lets you know she may have matured since her teenage debut,
but some things never change.