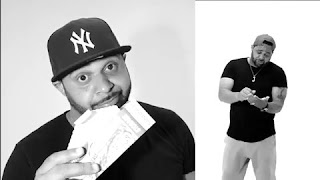 Brooklyn’s Joell Ortiz started on none other than Dr. Dre’s Aftermath label and built a huge buzz in the industry.  He’s worked with legends like Just Blaze among others. He then signed to Shady Records as ¼ of the super-group Slaughterhouse. He’s worked with Hip-Hop titans Eminem, Busta Rhymes, Jadakiss, Akon, and Big Daddy Kane.

Joell Ortiz’ previous project on Mello Music Group, Mona Lisa, was a collaborative effort with Apollo Brown (who also returns to produce two tracks on Monday) and it made quite an impact at retail upon its release; premiering at #3 on the iTunes Hip-Hop chart, it also premiered at #3 on the Amazon Hip-Hop chart and held down the #1 spot on Bandcamp’s bestseller list.

If it weren’t for Hip-Hop, Joell Ortiz would be living a different life; just ask anyone that knew him then. An homage to Craig Mack’s classic “Flava In Ya Ear RMX” music video, Joell teams up with director Jovi to bring history to life.

“The “Before Hip Hop” video is black and white by design. I didn’t want to dress it up. I wanted it to remain as cut and dry and honest as possible. I wanted the camera in my face so the viewer could look in my eyes and see that it’s pure” Joell commented.  “Before Hip Hop, I was a different person. I grew up in a rough environment that made me behave, respond and live in a certain way. I lost childhood friends (whose photos flash in and out of the video) way before I could even fully comprehend death. Yet, I found ways to smile, have fun and enjoy the hood with the homies almost every day. Simple video for the simple truth of a rapper from Cooper Park House in Brooklyn, NY. I’m just happy to be here.”