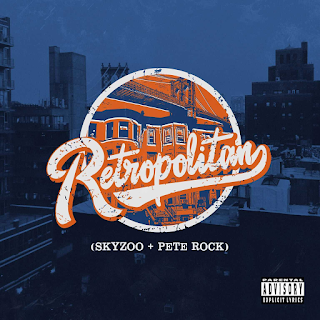 Retropolitan is as New York as ordering a chopped cheese sandwich and a Backwoods while being watched by a bodega cat. It’s a crowded and delayed 4 train clattering into the Crown Heights-Utica Avenue station, a dollar slice, a yellow cab, a killer crossover at The Rucker, a busted fire hydrant in the summer with kids leaping into the water. It is a dozen tracks of elegiac, restore-the-feeling, five boroughs hip-hop from two of the finest to ever incinerate a mic or set an SP-1200 aflame: Skyzoo and Pete Rock. Welcome to the rebirth of the city.

Let Skyzoo tell it: this is a love letter and a wakeup call to New York, all at the same time, as they have witnessed its culture stripped away layer by layer.  The tone on the Mello Music Group album is clarion from the introductory clips of “Men Like Us.” The Brooklyn MC and the Mount Vernon immortal have been tested in the wars; they’re experts trained under fire, fated to make waves and create change. In an industry overrun by clout- chasing amateurs, Retropolitan is a testament to the mastery of craft, the meticulous story-telling, sample chopping, syllabic intricacy, and drum pattern genius that can only come from a virtuosic pair for whom hip-hop perfection has been a lifelong pursuit.   You already know Pete Rock. If you don’t, just check the records shattered in the hip-hop Hall of Fame.  The Chocolate Boy Wonder is on everyone’s production Mount Rushmore. He is arguably the greatest remixer of all-time, behind both classic solo albums (Soul Survivor I and II, PeteStrumentals) and in the group formation with his original partner CL Smooth. In “T.R.O.Y,” he’s responsible for the anthem that defines the golden age of the most important form of musical expression of the last half-century. He made “The World is Yours.” And he crucially became a principal influence on subsequent production visionaries like J Dilla and 9th Wonder.
“It’s All Good,” finds Skyzoo skating over a beat from Pete’s secret “SP-1200 stash,” and this one in particular was produced in 1994 around the same time as Pete's Illmatic sessions with Nas.

Today, Sky and Pete are back with a visual for “It’s All Good,” which was premiered by Vibe.  “The video, directed by Sen Floyd, shows a raw but vibrant scene of the NY that Pete and I know” Skyzoo conveyed to Vibe.  “The graffiti, the color schemes, city folk cutting by in between shots, even the industrial feel that peaks it’s head in the camera at times, all of it, along with the shots of the corners and 22 story buildings that define NY, are what we know of the city. It matches the essence of the song perfectly. One of my favorite videos to date for what it depicts and represents”.

Retropolitan includes 12-tracks, all produced by Pete Rock, with features from Styles P, Benny The Butcher, Conway, Westside Gunn, Elzhi and Raheem Devaughn.  It is more than an album of dope rhymes and dope beats.  It’s two generations of legendary native New Yorkers putting it down and pulling no punches.
Skyzoo & Pete Rock’s Retropolitan will be released on 9-20-19 via Mello Music Group.