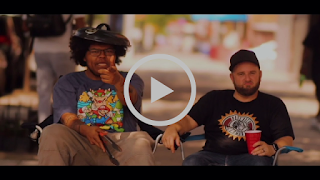 The new video for "Sidewalk Barbecue" is a summertime banger of 90s proportion! The track is from The Good People featuring fiery appearances from A-F-R-O and Termanology. Directed by Shock B, the accompanying video is a good-time street cook-up uptown featuring the emcees sharing libations, meats and bars.

The Good People is the duo of emcee/DJ Emskee and emcee/producer Saint and "Sidewalk Barbecue" appears on the recently released "The Summer EP" out now via Below System Records and vinyl via De Rap Winkel Records. The duo has been releasing music together since 2004 which eschews the violence and misogyny of hardcore Hip-Hop but still give fans that energy and sound of classic 90s Boom Bap.