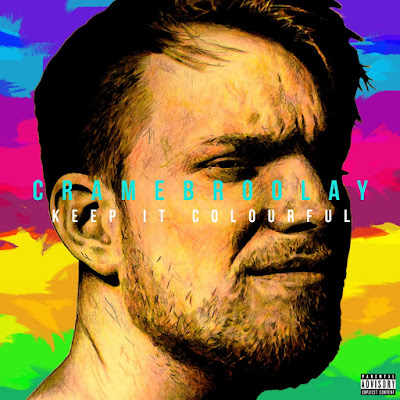 Portland artist Cramebroolay releases the Official Music Video for his new single "Blurs Of Colour" from his recently released album Keep It Colourfulavailable now on all digital streaming platforms. Produced by Cutty Flam, "Blurs Of Colour" finds Cramebroolay poolside soaking in some of the best nature the Great Northwest has to offer. Taking things easy on a perfect Summer day, Cramebroolay runs through multiple complex rhyme schemes as he breaks down how he's living on the daily and what it takes for him to take his mind off the madness of today's world. A long-time supporter of the Portland music scene, it seems now is the time for Cramebroolay to unleash the artistry he has been crafting and storing inside for the last 5 years plus. "Blurs Of Colour" appears on the debut project Keep It Colourful that tackles the ever-present issues of race relations, religion, drug use, and so much more. Be sure to tap in with this up and coming Portland artist on Twitter and hit play on the Official Music Video for "Blurs Of Colour" below.

More Information on Keep It Colourful
Cramebroolay has been working on his debut album for the past 5 years. After much creative self-discovery and growth, he presents a project centered around the concepts of adding to and appreciating already existing value in any given scenario. He was raised in a very conservative and religious upbringing, and this album serves as a love letter to embracing racial unity in the face of hatred and embracing his own path. He speaks on questioning preconceived notions about the world and belief itself, as well as climate change, empathy, self-love and respect. Positivity and embracing life and all it has to offer, while straddling the line between discussing ideas and preaching, are a huge part of what makes 'Keep It Colourful' great.