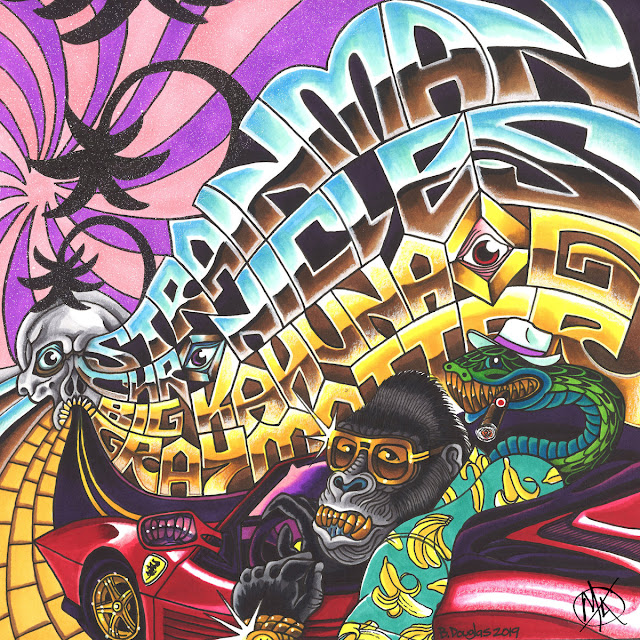 It’s impossible to keep up these days with the onslaught of hip hop releases this year. I’ve heard plenty of people say that the music released today doesn’t mean as much because of the oversaturation. I beg to differ, you just need to know where to look and one of those places is the DMV. There’s a whole tangent here on how the DMV has been making incredible music for the last decade (and probably beyond) but today I want to focus on Mutant Academy’s Graymatter & Big Kahuna OG. The two are prolific in their own rights as independent artists, that net stretches wide the minute you tally up the collaborations they’ve done. The two actually did a record together in 2017 called “Catastrophic Inventions Volume I”. The duo has returned with their sophomore project, a full-length album called “Strainman Chronicles”. Between the trippy cover, the sleek, clean, confident bars from OG and the thumping production from Graymatter, this might be my album of the Summer.

“Strainman Chronicles” comes in at just under an hour and the amount of content packed in this album is a rarity these days. With 20 tracks, the album almost hits like a flurry of punches, barely giving you a chance to breathe before Graymatter & OG hit you with the next one. To be honest I love it. Big Kahuna OG comes in 10 seconds into the album over a groovy instrumental from Graymatter. “Draco Slide (Fall Back Pt. 3)" sets the table for what’s to come. The duo has blessed us with a consistent full project in an age where 20 track albums can contain a lot of filler.

If you’re late to the party both OG & Graymatter are part of the Mutant Academy collective and one of my favorite parts of this group is that they actually work together. The minute you turn on any of their collaborations you can tell each member has refined their own craft, but also the chemistry within the team is always there and never feels forced. We get tracks like “Strain Seminar” which features the other half of Big Fly in Fly Anakin. An unbelievable verse from Nickelus F in the dark & grimy “Re-Rock At Lee’s” and properly fit verse from Monday Night. The culmination of all these verses still has me clamoring for a Mutant Academy album, perhaps in another timeline.

Graymatter’s production on this is perfection. Listening through the album, I’m still hearing things I didn’t notice on my previous listens. I think it’s easy to pigeonhole, production and certain sounds as underground or otherwise, with Gray’s instrumentals, I can smoke and chill to this, however, this album EASILY bumps in the whip. Combine this with Big Kahuna OG’s overwhelming and deserved confidence and skill, this is one of my favorite albums of the summer and is easily thrown in my pile of albums to look at when Album of the Year conversations start.

“Strainman Chronicles” is a must-listen for anyone who loves the underground sound but wants to see it brought to 2019. Big Kahuna OG waxes every beat on this, I mean the man literally begins “Hot Boy Summer” with “I’m in my ex-girl’s crib playing Madden 04…”. There’s humor in these lines, drugs in these lines, don’t let that trip you up though, Graymatter and OG are vivid storytellers with all they’ve been through. Between the weed, the pursuit of money, there’s a lot going on in these records if you give them a few spins and really take in what you’re listening to.