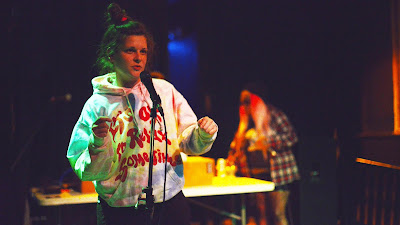 The message on Chicago rapper Ash Wednesday’s latest project is simple – white people need to do better. As a white woman operating in a black artform, Ash recognizes that “there are rules to rap and hip hop culture” and “there are things you’re not supposed to do as a white person.”

The title of her new EP, NoJulz, is an attempt to check social media influencer and talent manager YesJulz, who has made several headlines for her problematic behavior and lack of social awareness.

“I’ve had this title NoJulz on the backburner for a couple of years,” Ash said. “YesJulz, if you’re familiar with her, pops in and out of popular culture doing questionable things, which I won’t detail here, but do your research people! Anyway, folks were saying her name again in early 2019, so I was like, okay this concept is still relevant. People are still using this shorthand, “NoJulz,” to talk about how white people should not act, so there’s something to talk about here -- let’s make it the title maybe we can start a conversation.”

The three-song project features some of Ash Wednesday’s best work to date, with her unique sense of humor and witty word play. NoJulz was entirely produced by Na$im Williams and features Sisi Dior, ShowYouSuck, and Luck. The project originally featured a short clip of fellow Chicagoan Saba’s freestyle on "Sway in the Morning" from 2017, in which he says “like Ash Wednesday, raps in a basement still.” The intro was later removed after a request from Saba’s management team.

OK-Tho had a brief chat with the Chicago emcee about her new project, working with Williams, her film making work, and why her intro was removed from NoJulz.


OK-Tho: How does NoJulz differ from your previous two projects?

Ash Wednesday: This record features a whole lot more collaboration! There is a feature on every song, and production was mostly handled by Na$im Williams. My band did lend a hand on the melody in A.I. (Shots) and the pop hook in Live 2 Tell.

OKT: You said when working with producer Zak Fox on Turn the World to Ash, that you and your band were heavily involved in shaping the music, while Fox worked as your “hands.” Did you and your band work in a similar capacity with Na$im Williams on this project?

AW: My band was less involved with this record -- they lent a hand with the melody for A.I. (Shots) and the pop hook in Live 2 Tell, but aside from these two things this was a Na$im Williams production!

OKT: I know you and Na$im have been working together in organizing shows and charity events. How was it working with him as producer and rapper for this project?

AW: Before we decided on making NoJulz I had been working on a longer project with my band. Na$im had been coming to sessions with them as well as producing some tracks for me on the side. Since Na$im is such a wiz with the beat making these tracks got out ahead of the others, so we decided to group them and push them out as a set.

Collaborating with Na$im is top notch. He’s got a process in mind to get the sound he’s after. He works quickly and iteratively to get to a structure & sound he likes, then we start with the special sauce. He was able to bring out a whole new sound from Ash Wednesday that we can build on. 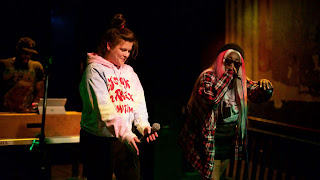 OKT: You open NoJulz with a clip of Saba rapping on “Sway in the Morning” where he says “like Ash Wednesday, raps in a basement still, cadences that kill.” I know you’re pretty tight with some members of Pivot, do you think that line is about you?

AW: So when that freestyle dropped in 2017 I definitely thought it was about me. I remember watching it on YouTube at work and just being totally floored like my jaw dropped. I got up out of my chair. Like shit we were just rapping in the basement! I didn’t take it as a shout out, because it almost seems like he struggling for words there, but yes I definitely thought he said my name! Another member of Pivot heard what I heard, so I thought “wow that’s something cool that happened.”

OKT: You also mentioned having back and forth with Saba’s management about the clip and that they wanted you to take it down. I noticed it’s not on SoundCloud or AudioMack. How did that whole exchange go down and what did you end up deciding to do with that intro?

AW: Yeah so we decided to put this snip from the radio on the record, and I informed a few members of Pivot that the track was on there. I asked them to let me know what Saba thought about it. His manager came back on email heavy like “you never cleared this with us,” which is true, but at the same time I’m actively reaching out to members of the group who I know, and letting them know I’m using it, and asking for feedback. I mean - my reaching out to members of Pivot is what brought the clip to the manager’s attention in the first place, so I’m not hiding that I’ve used the clip, but I’m also not going to call Saba and ask him “were you talking about me?” I had all the info I needed.

As far as legal clearance goes I’m fairly sure Pivot does not own the rights to the radio broadcast, but since Pivot’s management wanted me to take it down I agreed.

I removed the track myself from Audiomack and Soundcloud, and I submitted a request to have it removed from streaming services by DistroKid and gave the manager a date by which it would come down from those services where DistroKid distributes.

That’s some extra special shit. Distrokid doesn’t immediately take down records that get copyright complaints. It makes me think Cristela and Rory were pulling strings to get my project wiped, which is kind of cool. West side go crazy!


OKT: You also recently put out a music video for “Do It for Me” with MFnMelo (off of Turn the World to Ash), why was it important for you to continue to push that record with a new project on the way?

AW: I was mostly looking to drop a video for something and “Do it for Me” made sense. It’s one of the most hitting songs off the old project.

I’ve been getting into video production over the past couple of years, and I wanted to try my hand at a music video for myself. We shot the whole thing on a GoPro 7!

OKT: You’ve done a lot of impressive video work over the past year or so – from promo clips to giving recycling advice. Do you have any other videos in the works?

AW: Yes! I really want to work with Dinnerland on a music video for "A.I. (Shots)" ft Sisi Dior. Their style is incredible; I know they’ll be able to give us a one of a kind treatment. They’re a production studio out of NY. Check them out.

As for videos made by Ash - I would love to put together another few episodes of INLIGHTN. Our first two with ShowYouSuck and Korporate are gems to me.