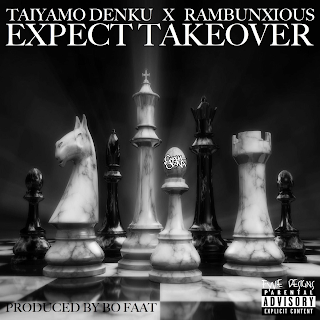 The title speaks for itself as Taiyamo Denku over the heavy sample and bass production from German producer Bo Faat deliver a CyphaDen takeover. Rambunxious the Madison based emcee by way of Phoenix jumpstarts the song with his unique original style and voice. Both Denku & Ram lend each other a hand on the hook. Then Denku big ups the production before going into his punchline heavy verse which concludes this first video single by Ram & Denku which was created by the man with the great vision and eye CTM FILMS.

Watch and listen to Expect Takeover and expect more from these two solo and as a duo .