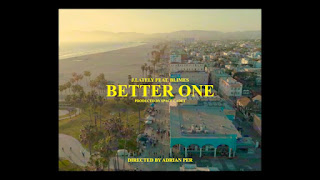 Bay Area, California emcee J.Lately presents the Adrian Per-directed music video for "Better One", the lead single from his new EP Tuesday. The track features a guest appearance from fellow Bay Area emcee Blimes and is produced by longtime collaborator Space Cadet, the beatsmith behind half of Lately's 2017 album Be F*cking Happy (watch the "Papayas & Blunt Smoke" music video) who produces the entirety of Tuesday, which also features appearances from The Grouch and Khyenci.

The "Better One" clip comes on the heels of the release of the music video for "Run" (watch the music video), also included on Tuesday. "Better One" has already spawned a remix featuring Andre Nickatina and Zion I (Spotify). Last year J.Lately released the "Fun's Up" single (Soundcloud), "Free" (Soundcloud) and "By My Lonely" (listen) featuring fellow Bay Area emcee Locksmith. Hailing from Sebastopol, and having split time between Oakland and Southern California, Lately has toured with Andre Nickatina, Zion I, Locksmith, and A-Plus of the Hieroglyphics, and his previous releases include "Save Yourself" featuring Blu (Soundcloud) and visuals for "I'll Be Living" ft. Demrick (Youtube) and "Papayas & Blunt Smoke" (Youtube).

J says the new track is about "appreciating your own struggle and journey, and using it as a way to create confidence and happiness in yourself. Blimes and I have crossed paths a lot in the local Bay Area scene, as well as moving around the country, and it was high time for us to connect on a joint together. We had hella fun running around LA shooting this video with the very talented Adrian Per. Also, my dude Space Cadet killed this beat."