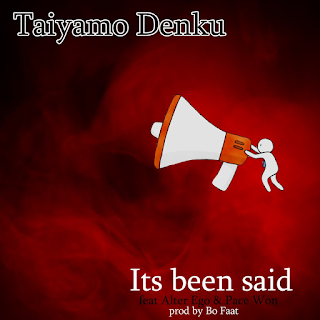 The 2nd official single off Taiyamo Denku's new upcoming album "The Darker Side Of Light". Bo Faat the german based producer creates a soulful yet hard gritty boom bap track that allows Denku , the Milwaukee native to team up nicely with his fellow Milwaukee emcee Alter Ego and Jersey former Outsidaz member Pace Won. This song is a statement. Alter Ego sets the tone with
a strong voiced hook and there is no looking back after that. Denku balances both Ego & Pace by adding his bars to the middle of the track. The noticeable voiced Pace won of Outsidaz sums up the song by finishing the track. "Its Been Said" is Bars , Lyrics, Boom Bap, the epitome of what Milwaukee native emcee Taiyamo Denku has been known for.
"Let Go" alter ego rapper boom bap Milwaukee hip hop Milwaukee rap outsidaz pace won pace won Taiyamo Denku
Reactions: