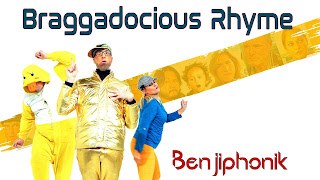 In an outrageously bold statement Riverside, CA's alternative rap Bad-boy, Ben “Benjiphonik” Stewart, accused the Hip Hop community at large of being “A whole bunch of Sucka MC’s!” The rapper was recently convicted of Stealing Hip Hop, and in a fit of pure rage recoded a brag-n-boast anthem against “Those unambitious, milk & tonic, rap-babies that ratted me out.”

In a separate statement the International Hip Hop Consortium was quoted as saying, “Benjiphonik is a bald, nerd-rap, wannabe that shouldn’t quit his day job.” When we contacted the rapper for a comment on the IHHC’s remarks we’re pretty sure he started to cry. Benjiphonik’s Old School infused Hip Hop has been very popular in dive bars, as well as the Bat and Bar Mitzva party scene. Many are saying that the rapper is merely a legend in his own mind, and Phonik’s own Lucky Greek coworker, MCL, was quoted as saying, “That dude spends most of his time in some kind of Hip Hop VR dream world. He doesn’t get any work done, and he can’t dance worth beans!”