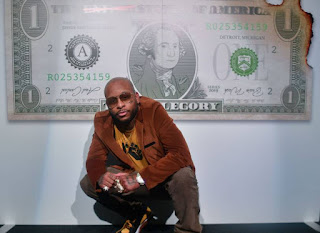 February 26, 2020 (NYC) – Following last week’s highly anticipated release of THE ALLEGORY,  Royce 5’9” enjoys both the #1 and #2 spots on iTunes Hip-Hop/Rap Albums chart debuting at #1 with the release THE ALLEGORY while enjoying the #2 spot  for his work on his Bad Meets Evil partner EMINEM’s Music To Be Murdered By.  The Allegory was released on February 21st via Entertainment One (eOne) and Heaven Studios, Inc. and is available on all DSPs and for purchase on iTunes.


To commemorate the release, today, Royce gives fans the new Cricket-directed visual for “TRICKED,” featuring his Slaughterhouse brethren KXNG CROOKED with a premiere-feature story from Complex which speaks on the poignant delivery of The Allegory.


In addition, THE ALLEGORY is already gearing up for both national and international critical acclaim and has seen rave reviews since its release last week.  Here are just a few:


NPR  placed the work of art on its “Top 9 Albums” for February 21st, while EXCLAIM! says on The Allegory Royce shows “emotional nuance and maturity,” DJ BOOTH calls Royce a “Rare Rapper,” HOTNEWHIPHOP states, “Royce has taken the time to curate a sonic collection of conversations, intellect, and understanding of perspectives,” VIBE says the work “motivate(s) Black people to love one another,” while NME says  The Allegory is a “lesson in lyricism.” Royce gets hometown love with the cover the DETROIT METRO TIMES where the publication states “The album is dark, and by that I mean that it is Black AF.”


In addition to traditional news, the wordsmith of legends visited LA LEAKERS and dropped off an amazing freestyle that is getting traction from coast to coast.  Listen to the murk session here.


THE ALLEGORY examines a climate where frauds are being perpetrated all around us.  Political divisiveness, rising racial tensions, civil rights violations, social media toxicity, fame culture, wealth disparity, mental illness, mass shootings, the lack of parental oversight and an opioid epidemic that is ravaging our communities.  These are just a handful of the issues that are eroding our social and moral fiber and the trickle-down affect it has created.


“THE ALLEGORY is a study on perception about the ills that are afflicting our society.  I have a desire to give light to these wrongs in an effort to start the conversation and hopefully help the next generation navigate through to change the narrative,” states Royce 5’9”.


THE ALLEGORY continues to display Royce’s progression and growth as an artist, as he immerses himself into production, solely producing The Allegory in its entirety.  His foray into production was foreshadowed by Eminem’s recently released chart-topping album, Music To Be Murdered By, as Royce co-produced two tracks from the surprise album, including “You Gon’ Learn” featuring White Gold and with Em, Royce adds to his production arsenal on the controversial lead-single “Darkness.”


Royce is set for a live performance on SiriusXM today and will perform on  Billboard Live on Thursday @ 1PM.  While Royce 5’9” continues to make music in the studio for his next opus be sure to be on the lookout for tour dates near you.