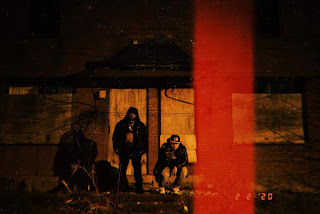 Syracuse, NY hitters B.A. Badd and Trenchoat Maf are on their Hired Gun ish in new video. Directed by @cutnshoot_ in grimy black & white, the two crimeys talk greasy over a haunting instrumental by Graphwize

The track is taken from Badd's newly released album Everybody Eats (1st Plate) which also features appearances by Conway The Machine, Rome Streetz, RIM (Da Villains), Adonis, AA Rashid and Prxfet. Speaking on his connection to hometown homie, Maf, he said I met Maf years before we ever did music together. His younger cousins are like brothers to me. We happen to have the same manager who played the Graphwize beat for us. We decided to go in together and the energy was so crazy that Graphwize, Maf and I are in the process of completing an EP called Dirty Revolver to drop this year.