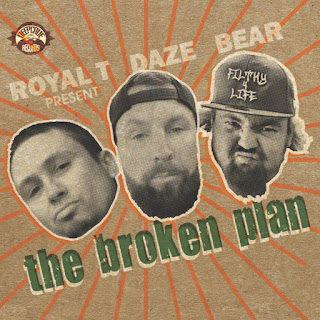 The Broken Plan brings together the talents of Royal-T, Big Bear and Daze. A skilled chopper, Royal-T built his rep as a battle rapper across Canada, from his birthplace of St. John’s, NL, to Thunder Bay, ON—releasing the city’s first professional rap CD—out to Vancouver, BC, finally ending up in Winnipeg, MB, where he joined with gritty local rapper Big Bear to found Deepcave, a record label and crew. Bear is currently one half of Filthy Animals. Daze, also a Newfie who moved to Winnipeg, is the last ever Deepcave member. His last single, “Toxic”, was featured on D.R.U.G.S. (Dat Real Underground Shit), a mixtape compilation presented by Bizarre of D12.The trio finished recording The Broken Plan in 2016, but plans to release the album and tour were broken by the death of Royal-T, who took his own life after a long battle with mental illness and substance abuse, a struggle he exposes with raw honesty on closing solo track “Rock Bottom”. It’s a powerful song that will hopefully resonate with those experiencing similar struggles. The trio also raps about overcoming adversity, showing pride in poverty on “Broke” and hoping for a better future with “Keep Moving”; they criticize fakes on “Identity Crisis”, add some levity with “I Drink I Smoke” and “Manager”, and flex skills with punchlines and braggadocio for “Ali Boomaye” and first single “Phenomenon”. Unable to mix the album because of emotions, Bear and Daze finally honour the memory of their fallen comrade almost four years later with the release of The Broken Plan as it was meant to be. R.I.P. Royal-T.