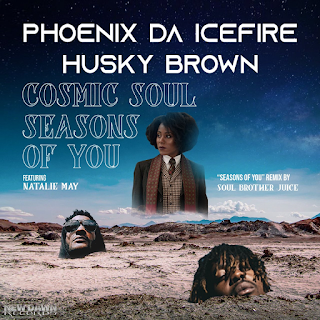 As a member of Triple Darkness, Phoenix has long been regarded as one of the most gifted lyricists from the UK.  In the new album he addresses some of the most pressing current issues covering the environment, mental health, racism, knife crime and aspiration in a highly creative and skilled narrative.  Husky's productions are a rare and fresh fusion of contemporary hip hop, electronica, dub, bass, r&b and soul, resulting in a dynamic and highly impressive soundtrack.

First single released today is a double A side already enjoying heavy international airplay. "Cosmic Soul" has the South London rapper on a shamanic journey over a hard hip hop beat, while "Seasons of You" is a soulful r&b floor filler featuring Natalie May (as heard on Rudimental's "Sexy Sexy"), remix courtesy of Soul Brother Juice.

The album launch event will take place at London's Brixton Jamm on Friday May 8th.