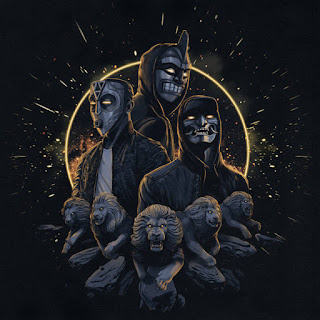 Jamo Gang consists of LA legend Ras Kass, NYC veteran emcee El Gant and J57 on production.  The trio’s debut album “Walking with Lions” is set to be released on April 10, 2020 via Fat Beats Records.  The album features DJ Premier, Slug from Atmosphere, Sid Wilson from Slipknot, Sick Jacken from Psycho Realm & Slaine from La Coka Nostra.  J57 handled all of the production except for “The 1st Time” which was produced by living legend, DJ Premier. The “Walking with Lions” LP embodies head-nodder boom-bap infused with big sounding, lush soundscapes as Ras Kass & El Gant command the listener’s attention speaking on subject matter ranging from school shootings to what life would be like with a nuke arriving in 38 minutes.

El Gant on the single "Belushi & Aykroyd" which is available now on all streaming platforms:
"Ras and myself thought it would be dope to do a back and forth record over such a banger that J57 put together. Once J hit play in the studio, we knew exactly what needed to happen over those drums! We were all joking around earlier in the day about how so many artists right now are jumping on whatever trend someone else did and how we are proud to go in our own lane, sparking the first line of the hook "I dont rock with NOBODY". We thought it was funny comparing ourselves to Belushi and Aykroyd (The Blues Brothers), because we feel we are good at what we do, and get into alot of trouble (and hilarious adventures) doing it."
el gant rapper J57 Producer jamo gang ras kass 2020