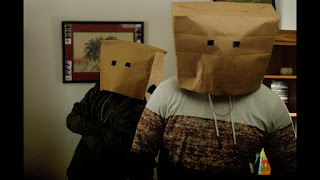 Archie
Shepp,Raw Poetic,
and Damu The Fudgemunk
are pleased to announce their new collaborative album Ocean
Bridges, outMay 22nd on Redefinition Records,
alongside the album’s lead single, “Learning to Breathe.”
Entirely improvised, Ocean Bridges
was intentionally created without any direction, resulting in a finished product with natural energy, a conversation of ideas that transcend genre. The album blends live improvised music, jazz, hip-hop, and many other musical directions into a one-of-a-kind
sound.


Ocean
Bridges was initially conceived afterJason Moore(aka independent, underground rapper Raw Poetic) attended an event with
his mother at the Kennedy Center honoring his uncle, legendary saxophonist, Archie Shepp. Moore had sent over a dozen projects to Shepp over the last two decades, but after hearing some of Moore’s recent projects with producer/DJ, Damu The Fudgemunk, Mr. Shepp
felt his nephew was, in a sense, “ready”. The album’s title, Ocean
Bridges, intends to signify a bridging-of-the-gap in their family’s
story and a re-establishing of the connection between young and old in their general community.


Ocean
Bridges marks the first time Shepp and his nephew, a successful rapper,
educator, and children’s author in his own right, have put music to record for widespread release. In Moore’s own words:“I began writing down the parts in my head that could
tell a story, a black American story that would expand across the ages, a story from my grandfather to my uncle, from my mother to me. We bridged the gaps of time, culture and struggle and made an album I always dreamt of. Ocean Bridges.”


Lead single
“Learning to Breathe” is a blend of urgent bass, tense percussion, and Raw Poetic’s distinctive delivery and rumination on legacy: “Put legacy in my tone/blood in the banjo, my bones/my voice the new saxophone/this Philly shit can’t be cloned/now watch the
pass take a form -  it’s a passing of the torch,” says Poetic. “The only thing a new life form learns on its own is breathing. Learning to breathe.”

WithOcean
Bridges,
the sound is unforced, impossible to duplicate, relying on a one-take method. It is very much an organic collaboration where contributors of different and overlapping musical sensibilities have joined together in one space.
Ocean Bridges is available to pre order now-https://soulspazm.ffm.to/oceanbridges