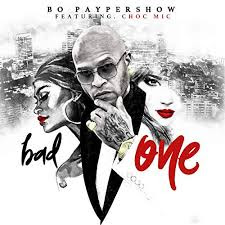 Little Rock, Arkansas native BO PAYPERSHOW teams together with Burlington, New Jersey artist Choc Mic for an ode to the queen on every king's side entitled "Bad One".

With the release of the audio single on all digital outlets, BO contracts Brandon "Champ" Robinson for a video of epic proportions. BO PAPYERSHOW makes music that strongly pertains to an adult audience. However, he is able to craft music that has a potent, commercial vibe to them as shown with his latest drop.

Shot on location in California, the duo show up and show out to the extreme, complete with high end jewelry and exotic vehicles to match. Don't let the material things fool you however. BO makes sure to keep the focus of the entire song on that special lady and just how much she means to him.

The video could easily be called a short film, as the run time clocks in at 6:40 and contains an insane interlude that looks like it could be a clip out of the next Narcos series. Top notch audio combined with such an eloquent video makes "Bad One" a surefire hit to add to your playlist.

Watch the full video below.