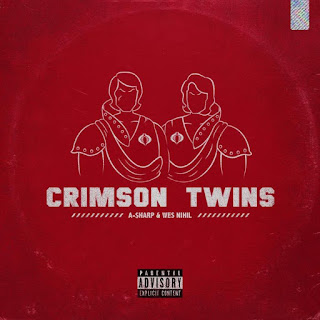 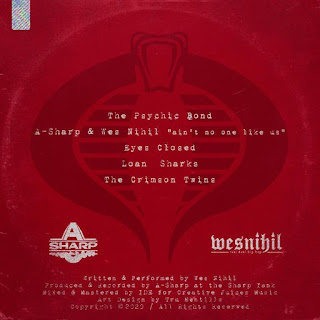 Many experts claim that some twins have the unique ability to read each other's mind, sense when the other is in danger and even feel one another's pain.  These uncanny talents are what tie the Crimson Twins, A-$harp and Wes Nihil, together.  Although not biological twins, $harp and Wes have formed a decade long bond that continues to sharpen their twin super-powers with every studio session.
As youths, both Brick City commanders had a love for Hasbro's G.I. Joe comics, cartoons and action figures.  This mutual adolescent infatuation brainstormed into the birth of their hip hop groups' name, Crimson Twins, which is a nod to twin brothers Tomax and Xamot Paoli, both G.I. Joe characters who are the leaders of Cobra's elite troops, the Crimson Guard, and enemies to G.I.Joe.  When discussing their groups' name with hip hop media giant HipHopDX, Wes Nihil expressed, "I always had love for the villains in comics, so naturally I found myself routing for Cobra as a child, and now as an adult, I consider myself a Cobra MC rising up from the underground to fight against the current state of cookie-cutter hip hop."  A- $harp added, "Sometimes when you fight against what is popular or mainstream you are viewed as the enemy, but sooner than later, you will all discover the Crimson Twins aren't the enemy.  We are actually the heroes of this mission."
On the groups' debut title track, "The Crimson Twins", A-$harp constructs an infectious head nodding back drop for Wes Nihil's well crafted aggressive wordplay resulting in a thunderous introduction for the newly formed duo. In the music video, director John L brings the viewer behind the curtain of the Crimson Twins very own Cobra Command Center where you can see boxes of CDs, vinyl, and t-shirts being prepared to hit the streets while masterfully blending cartoon clips of G.I. Joe's infamous Crimson Guard.
The Crimson Twins' five-song self-titled EP is out now on all major digital/streaming platforms with limited edition physicals on the way. 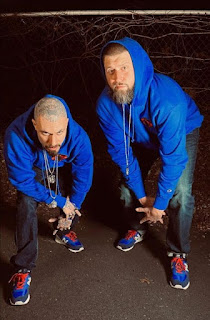