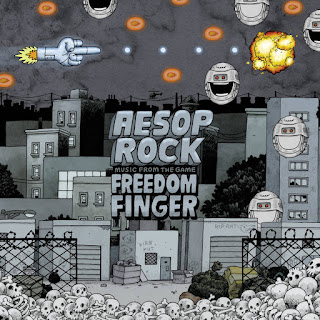 Following up on last year's
consciousness-expanding Malibu Ken
project and recent standalone single "Rogue Wave,"
one of rap's most verbose MC/producers, Aesop Rock,
has just released a ten track EP of music composed for the video game Freedom
Finger.Music From The Game Freedom Finger
is available now from all streaming platforms and digital retailers, alongside a just-launched pre-order for limited edition 10" vinyl. The release is accompanied by a
Jim Dirschberger-directed video for the song "Drums on the Wheel" that features visuals of Freedom Finger gameplay as well as exclusive visuals drawn by
Travis Millard and animated by Steven Gong.
"I was approached by my old
friend Travis Millard to make some original music for Freedom Finger
- a crazy space-shooter video game he had been developing with Jim Dirschberger and Wide Right Interactive game studio," states Aesop. "I provided some instrumentals that pop up at various points throughout the gameplay. As the game was being rolled out, the
idea arose to have me do three more tracks - this time fully fleshed out songs with lyrics inspired byFreedom Finger's
gameplay. These tracks were intended to accompany some brand new levels that would be made available as downloadable content for the game."
"We've decided to release all
of the music I made for Freedom Finger
as a 10" vinyl EP available through Rhymesayers Entertainment. This includes the three full-length vocal tracks as well as their instrumentals, and four more bonus beats that loop throughout the game. Some of these tracks also feature additional
instrumentation from my friends and frequent collaborators, Grimace Federation. The game is an absolute blast, and I hope you enjoy the music.  <3" Aesop Rock