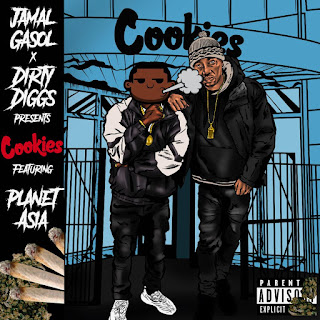 Niagara Falls, NY emcee Jamal Gasol is dropping some Cali vibes this morning! New single Cookies is the first leak from his forthcoming project with the production team of DirtyDiggs (JR, Noy). Guest featuring Planet Asia (with accompanying video to be released soon) Cookies is that dusted jazz type of beat where the two spitters drop that Piff-induced type of knowledge.

On 4/20 Gasol will release the 100 Blunts In Venice EP (in LP/CD format) which is the result of a weekend long recording session with DirtyDiggs. Though Diggs and Gasol previously made the Gasol Sauce EP (2018) this was the first time they worked on a project from scratch in the studio. Speaking on the process Gasol said Me and JR had talked about getting in the studio for a while. I wanted to be in Cali for the motivation and drive. Best decision I made in a while. No distraction and time away from all the bullshit at home just recording and driving around Beverly Hills in a Jaguar XJ pocket full of money. Both Planet Asia and Flashius Clayton came through to add a guest feature.

Recently releasing the Jamal Gasol Is The Future project (entirely produced by Italy’s Manzubeats) via Tuff Kong Records Gasol revealed he has several other projects including long-awaited The World Is Piff 2.0 full-length dropping soon.