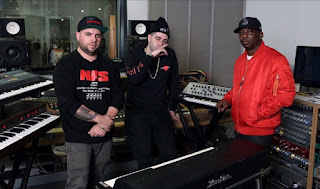 El Gant on the new Jamo Gang single: "We were al in the studio hanging out with Premier one night, and Preem played a few things he had in the chamber. We really liked the vibe to it, and the rest is history. J57 thought it was the perfect song to ask Slug to be a part of and he was with it. It is really exciting for us to have these two together for the first time on one of our songs."
J57 rhyming on a Premo beat for the first time: "This song means a LOT to us. This is my first time rhyming on a DJ Premier beat and working with Slug, two people I’ve looked up to for many years before becoming friends with them.  This is is perfect.  Premier even brought in legendary piano player, Tyler Kimbro to bless the track, which was also an honor."
Jamo Gang consists of LA legend Ras Kass, NYC veteran emcee El Gant and J57 on production.  The trio’s debut album “Walking with Lions” is set to be released on May 8th via Fat Beats Records.  The album features DJ Premier, Slug from Atmosphere, Sid Wilson from Slipknot, Sick Jacken from Psycho Realm & Slaine from La Coka Nostra.  J57 handled all of the production except for “The 1st Time” which was produced by living legend, DJ Premier. The “Walking with Lions” LP embodies head-nodder boom-bap infused with big sounding, lush soundscapes as Ras Kass & El Gant command the listener’s attention speaking on subject matter ranging from school shootings to what life would be like with a nuke arriving in 38 minutes.