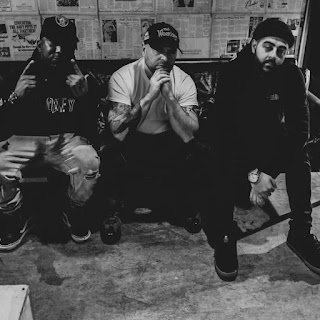 Jamo Gang consists of LA legend Ras Kass, NYC veteran emcee El Gant and J57 on production.  "Runyon Canyon" feat. Sid Wilson from Slipknot is the third single release from the trio’s debut album “Walking with Lions” set to be released on May 8th, 2020 via Fat Beats Records.
"While I was in LA I linked up with close Jamo Gang friend, Sid Wilson aka DJ Starscream of Slipknot." J57 explains. "I played Sid the Jamo Gang album which was 99% finished at that point.  I showed him the last song we were working on (which later became "Runyon Canyon") and told him it would be dope if he hopped on that record & we keep it as a surprise from Ras Kass & El Gant til the song's finished.  Sid was down with that idea, but he and his band Slipknot were leaving in 2 days on a huge world tour.  So, Sid brought his gear with him.  He did the scratches and his vocals in his hotel room in Amsterdam while on FaceTime with me".

The album features DJ Premier, Slug from Atmosphere, Sid Wilson from Slipknot, Sick Jacken from Psycho Realm & Slaine from La Coka Nostra.  J57 handled all of the production except for “The 1st Time” which was produced by living legend, DJ Premier.