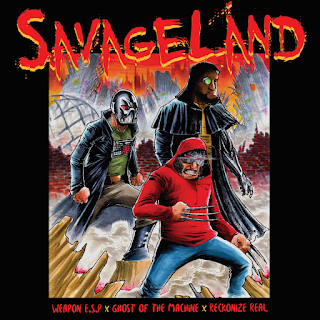 NYC producer Reckonize Real has built a name for himself in the last couple years through strong collab albums with Guilty Simpson and Moka Only. Next he had planned to do a joint project with up-and-coming Boston emcee Weapon ESP. However, after having Ghost of the Machine kick a guest verse on the first track they recorded, it was clear the trio had palpable synergy and they decided to form a group. They named themselves Savageland to signify their mutual love of comic books, but also to reflect the direction society is currently headed in.
The crew's first single is titled "Dystopia" and is a good intro to the dark, apocalyptic vibe of their upcoming self-titled album. Further, the cut features the most buzzing lyricist in underground Hip-Hop currently, Estee Nack.