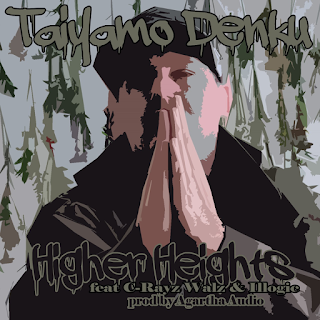 Denku is known for having a vaulted catalogue that still hasn't seen the light of day. The Milwaukee native Emcee has dropped one album this year and his second drops tomorrow. In the midst of all that music he still wants to drop a one off single that features 2 other amazing lyricists. C Rayz Walz , a punchline king of sorts joins Denku & the Ohio lyricist illogic on this Agartha Audio produced laid back, lyric savy song. Higher Heights is a song based on trying to show the world that in hip hop when your dope there is no ceiling and we constantly as artists try to reach higher heights. Listen to the one off single now.