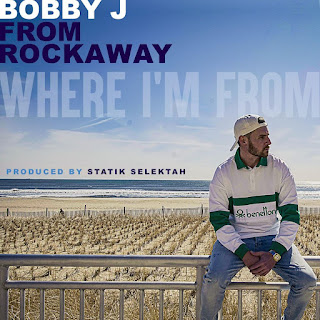 Growing up in Rockaway Beach, Queens, New York during the 90s, Bobby was immersed in a plethora of musical inspiration- from his mother’s love of classic
rock to his father’s affinity for disco, soul & Motown. It was his older brother Eric though who introduced him to hip hop. Bobby began his ascent into the industry at the young age of 13 when he met ‘The Rhythm’ rapper Kwamé, who at the time had begun his
reemergence in the industry as a producer. Bobby describes his time under Kwamé, who has since sold over 30 million records as a producer, as a period of artist development. “Kwamé saw something early on and just took me under his wing. He coached me on how
to make the transition into making records.” Ultimately, Bobby, whose sound and style are an ode to the era that birthed him, hopes his music can help inspire the imagination of new listeners. “I would like to be one of the artists of today that someone who
is 11/12 years old that may just be getting into hip hop can look up to.”
On the heels of his previous releaseSummer Classics (which included collaborations with Kwame, Jake One, Statik Selektah, Lil Fame (M.O.P.), DJ Wonder (Sway In The Morning) and Killah
Priest), today, the lyrics first emcee announced his new project, Endless Summer, which is produced entirely by Statik Selektah.  “I named the projectEndless  Summer not only because I grew up on the beach and used to watch the classic surfing movies religiously growing up, but also because the EP
is  in some ways a continuation of my last album Summer Classics” Bobby commented to HipHopDx.  “I worked with Statik on two records for that project
and really liked how they came out so I wanted to expand on that. Plus, I always liked the idea of ‘one artist/one producer’ collaborations, where a cohesive sound is crafted rather than just a ‘one-off’ song or single.
Bobby J announced his new project by premiering his new single and videoWhere I’m From with HipHopDx.  “Where I’m From is probably my favorite
record from the project and really encapsulates the feeling I’m going for. As soon as Statik played me this beat, I started saying Tre’s “being where I’m from” line fromRunnin in my head. The hook and concept came to me right away.  The crazier part is, when I went to record it, Statik actually had theRunnin acapella and was able to layer that part under my vocals which made it sound even doper. Conceptually, the song is just trying to paint a picture of day to day
life in my neighborhood of Rockaway Beach, Queens. However, the message is universal. When it came time to shoot the video, it was right around the time of Rockaway’s annual St. Patrick’s Day parade, which happens on the 1st Saturday
of every March. I had my videographer capture footage of people in the neighborhood having fun in their natural element. However, the outcome is bittersweet, as it was the last time people were able to gather before social distancing became a part of daily
life. It’s a snapshot of daily life that we as New Yorkers might not see again for a long time.”
Follow Bobby J From Rockaway:
https://twitter.com/bobbyjrockaway
https://www.instagram.com/bobbyjfromrockaway/
https://www.facebook.com/bobbyjfromrockaway
https://www.youtube.com/bobbyj
Follow Statik Selektah:
https://twitter.com/statikselekt
https://www.instagram.com/statikselekt/
https://www.facebook.com/StatikSelekt/