Benjiphonik - I Don't Even Know Where I've Been (Official Video) 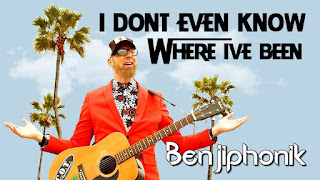 Renown world traveler, and acoustic Hip Hop phenomenon, Benjiphonik, was recently found wandering the streets of Mumbai, India. When asked what the heck he thought he was doing, the rapper replied, “I just stepped out for a cup of tea, and somehow ended up here. To be honest, I don’t even know where I’ve been!” Sightings of the orange-suited troubadour were reported in cities across the globe; from Hollywood, California, all the way to Osaka, Japan. Many are not surprised at the Hip Hop legend’s cluelessness. His own mother was quoted as saying, “I love him with all my heart, but that boy couldn’t find his way out of a gas station bathroom!” Regardless, Benjiphonik is being shipped back to America where his wife has been looking for him for weeks.