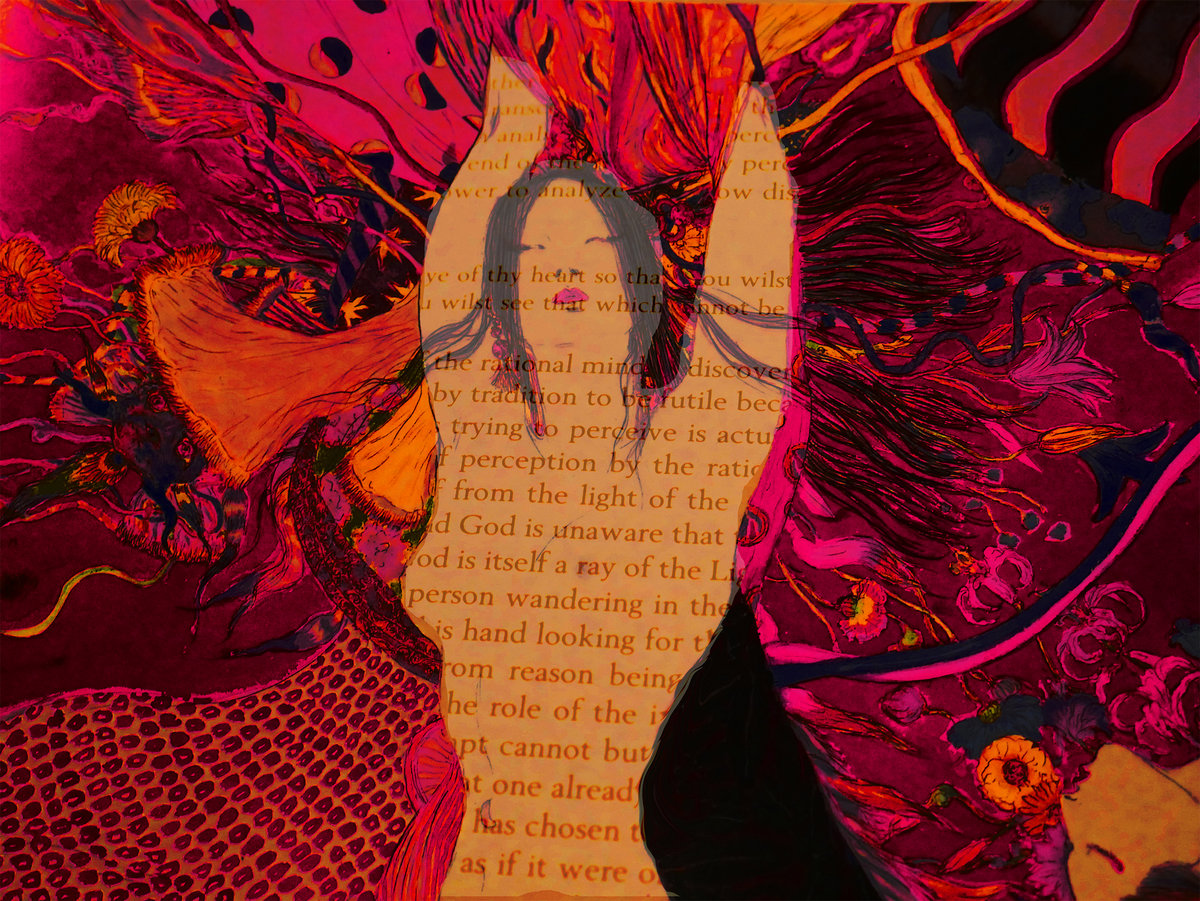 This extended play was released on April 14th this year. I believe it dropped exactly one day after I published my review of Rinpoche, and I had no idea this was even in the works at the time, so it really caught me off guard. I wasn’t aware of how prolific Iceberg Theory is as an artist. He’s gone on to release another project entitled Serapeum (The Daughter Library), which came out in May. I plan on covering that project as well, hopefully sooner rather than later. Anyway, after listening to Rinpoche I feel like I kinda know what to expect, at least sonically. I really love August Fanon’s style of production. He makes the kind of beats that only a talented lyricist can work over properly. Someone who only specializes in flows or catchy hooks would sound like a fucking clown over August’s production. I think I’ve become familiar enough with Iceberg Theory’s style of rapping to have a good idea of what he’ll be doing here. The main difference will likely just be the subject matter. The theme seems pretty different. One thing that’s cool is that the titles of his projects usually tell you what you need to know. If you look up the word “Rinpoche” it gives you some context on what the project is about. Same goes for this, as well as the aforementioned album that he dropped in May. Anyway, that’s enough dickin’ around for now. I think this shit is gonna be dope.

This track has a pretty tense instrumental, kinda like something you’d hear in the background of a documentary about aliens or some shit like that. I’m not exactly sure who the person speaking here is, but he’s talking about “metaphysical dimensions of the ecological crisis,” which… I don’t even know what the fuck that means personally, but it sounds deep. The percussion that eventually comes in sounds really good, and it initially sounded like it was going to segue into the following track very smoothly, although it ended up having a completely different instrumental. The track is fine, but it’s probably not something that I’d listen to again in the future. I didn’t really get much out of it aside from a cool instrumental. It’s just an intro though, so I’m not gonna pretend to be bothered by it.

2. Reign of Quantity (Signs of the Times…)

The sample here sounds really familiar, but I don’t really know why. The beat itself is pretty fantastic. I really like the opening verse from Iceberg Theory here. His delivery feels more expressive here than it was on Rinpoche.

The entire song is pretty much just one verse, but it’s really good. I feel like I kinda had trouble understanding certain words, but I think it’s mainly because he was saying shit that I’d never heard of, so I wouldn’t know how to spell it or what it even means. I’m pretty sure I got the majority of what he said though. I really enjoyed this track; I think it’s dope.

I like this jazzy beat even more than the preceding one. The production in general seems jazzier on this project than it was on Rinpoche, but maybe I’m just misremembering. For some reason this beat in particular makes me think of LA Noire. I can’t explain why. I guess it just kinda sounds like BGM from that game. Iceberg Theory’s flow sounds more aggressive here than usual.

I was reading histories like a rhoditis
Pulled a branch from the tree of life like a Kabbalist
Erect the stone pillars, an obelisk

The entire song is one verse, but he spazzed on this shit, and I love how the production gets extra jazzy at the end of the song. It sounds really great. I like this track even more than the preceding one; I think it’s really dope.

This track follows the same formula as the intro. The production is very jazzy, and the audio clip is of somebody speaking about some form of reincarnation. I don’t have too much to say about it since it’s just an interlude, but I do like the production here a lot.

I really love the jazzy production all over this project. This beat in particular is one of my favorites. The song as a whole is kind of a low point on the record for me though. I still like it to some extent, but as a song it’s just not super exciting. The verse from Iceberg Theory is dope, but I don’t really care for the singing towards the end of the track. The structure of this song is pretty much identical to every other song here too. It’s just one verse over a jazzy beat. I wanna stress that I do like the song; it’s just far from my favorite. It’s still good though; I fuck with it.

This is one of my favorite songs on the project even though it’s relatively long. I just think the production is really pretty, and Iceberg Theory’s performance over it is fantastic.

Was primordial super-molecules the recipe?
Or were we fashioned by a creator, designed expertly?
Did man have free will, or was it destiny
To lose our place? Indeed it was the devil or God testin’ me
Since the fall there was never peace
Original sin made our nature feckless and weak
Alpha and omega, the letters were greek
We thought atrocities could never repeat, it could never be

I usually dislike when Iceberg Theory sings, but I didn’t really mind it at all when he did it at the end of the verse on this song. I think it’s because he wasn’t really trying to reach into that higher register; it sounded more natural here. Sometimes it’s difficult for me to make out exactly what Iceberg Theory is saying, but I feel like I got almost everything here, so maybe that’s part of why I like this track so much. I think this one is awesome to be honest. It’s dope as hell to me.

This song has another super chill, jazzy beat. Iceberg Theory’s rhymes are on point here.

Old news and new ascendents
Won’t last until penance
Soul mastered, new apprentice
Lifetimes are too endless
Suffering too relentless
Tune the senses
To the ground of my being
I’m too attentive

The song’s pretty much just more of the same, but it’s still very well done. I don’t have any real gripes with it. I think it would’ve been nice if the actual song was a bit more adventurous sonically. Nothing about it stands out in a bad way though. I fuck with this song; it’s dope.

This is another jazzy instrumental with an audio clip of someone speaking. I focused more on the instrumental than what the dude was saying. I’m not gonna pretend to have anything to say about this track; I didn’t really pay it any attention.

This beat sounds more upbeat and celebratory than most of the others. I like it a lot.

This is another major highlight on this project for me personally. I love the production, and Iceberg Theory’s performance over it is awesome.

I was livin’ in the woods in a cabin, the rustic type
Before it all ends just know my spirit must ignite

I honestly like this track even more than Brahmin. There’s really nothing I dislike about this one. I guess Iceberg Theory’s flow isn’t particularly memorable, but I think his writing has always been the selling point of his work. This track is awesome to me. I think it’s dope as hell.

This song has my favorite beat on the whole project. I love the piano-driven production. Iceberg Theory killed this shit too. His flow is much more aggressive here than it usually is. The melodic outro was cool too. I can’t decide whether or not I like this track more than the penultimate song. Both of them are really fantastic to me.

It’s nice that this project ended on a high note. I think this shit is dope as hell.

This EP is great to me. I think it’s kind of an acquired taste; if you’re not into this jazzy, underground aesthetic & super esoteric lyricism, this isn’t for you at all. There’s nothing catchy or trendy about this. I think it would’ve been nice if some of the songs had more varied structures since pretty much every track was just one verse from Iceberg Theory over a super jazzy beat and maybe an audio clip of someone speaking at the end. The unique content is really nice though. I don’t know if there are any other rappers on Earth who are making music about the Perennial Philosophy. I’m personally not religious or spiritual at all, but I was still able to find this shit pretty interesting. Again, this is an acquired taste, and I’m sure it’s for a small niche audience, but it’s worth trying out to see if you like it because you’re not gonna find anything like this from anyone else. This shit is dope. Check it out.