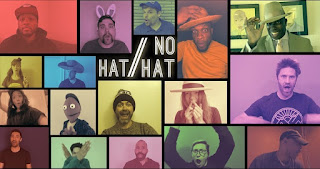 During these trying times, Chicago based comedy group Handsome Naked (Billboard Comedy Top 10, #2 iTunes Comedy Chart) answers the question on everyone's mind...hat or no hat?  The video features numerous comedians and influencers from Ali Siddiq ("The D.L. Hughley Show", "Def Comedy Jam") to Calvin Evans (Comedy Central's "South Side", NBC) to Becca Brown ("School of Rock") and more.  Premiering immediately following the groups performance for NBC's Instagram livestream talent show, the video will feature several other acts from NBC's "Bring The Funny", where Handsome Naked made their television debut (including a performance during the finale with Kenan Thompson, Chris Redd and Amanda Seales).