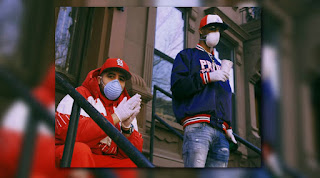 “When I moved to NYC, I told Body to link me with Fraud; as I always knew we would make something special” Jay Worthy commented.  “Next thing you know we were locked in doing an EP. We were in the studio till 7 am every night. It had my sleep schedule and eating all fucked up. The shit was fun though---I’d do it all over again.”

“When me and Worthy first linked up we just started going through a bunch of old music. As we were listening to all these songs from the 60s/70s/80s we started to key in on the same stuff and were chopping them up as we went” Harry Fraud asserted.  “We didn’t necessarily start with the intent of making a project, but before we knew it the project had made itself.”

Today, Jay and Harry unveiled the first visual from the project, “Hard Knock High,” which was exclusively premiered by Noisey.