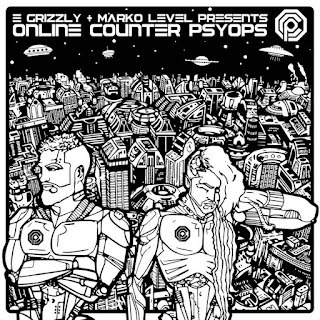 E. Grizzly and Marko Level team up with the A-HA Network to produce their new EP called OCP.  Both have been known to experiment with different genres and this release is no different.  This time they get back to their hip hop beginnings while still incorporating other genres like trap, bass and EDM.


Online Counter Psyops is a concept hip hop bass project by E. Grizzly and Marko Level.  Grizzly is the lead vocalist for the Philadelphia punk band Felipe Pupo.  Marko Level is the lead singer and producer for the Miami band Alukard.  both have played hundreds of shows in the Philly, Miami, NYC, and LA scenes.

The concept of this project is to share an alternative to the cliche ideas of society.  For more about Online Counter Psyops you can go to A-HANetwork.com.

"I wrote this project like I was talking to my younger self." says E. Grizzly.  "I didn't really have a mentor or a dad to help me out through life so I had to learn everything myself.  And I realized most of us never had an instruction book on life so these are things I've learned.  Things I would've told my younger self to make life easier.  That's why the concept of this EP involves alot of futurism, philosophy and psychology."  The EP was written, composed and produced by E. Grizzly and Marko Level