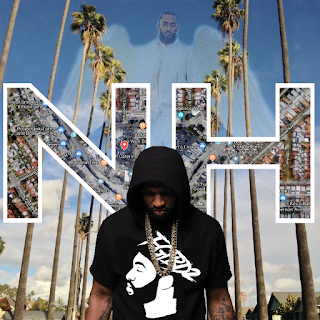 Leimert Park lyricist and mentee of Nipsey Hussle, UTK, releases a truly heartfelt visual for his latest single titled “NH”. The song and video were inspired by the life and legacy of the late great Nipsey Hussle. UTK, being from the same neighborhood as Nipsey, frequently crossed paths with Nip growing up but it wasn’t until 2018 when UTK won the Craft Syndicate / Dutch Masters Music competition that the two actually got in the studio together. The contest provided an opportunity for UTK to work closely with Nipsey and Zaytoven where the song “Hierarchy” was created. For the next few months after, up until the untimely death of Nipsey Hussle, UTK would soak up the “marathon mindset” which would set him in motion to create his most recent project, FGTBD2 (an acronym for Feels Great To Be Dope 2). The single “NH” is by far one of the most emotional songs on the entire project where UTK uses his lyrical and storytelling abilities to convey a message of positivity and truth. The songs’ stand out hook cries “Pray For My Neighborhood” and was written as a double-entendre highlighting parallels to the life of Neighborhood Nip Hussle and the “hustles” we have to perform just to survive in our neighborhood.

“Nipsey said to me, ‘Just go hard. Stop thinking so much and go with your first mind. You can’t out-smart your own brain’ and I was like WHOOAAA..Never thought about it like that.” -UTK