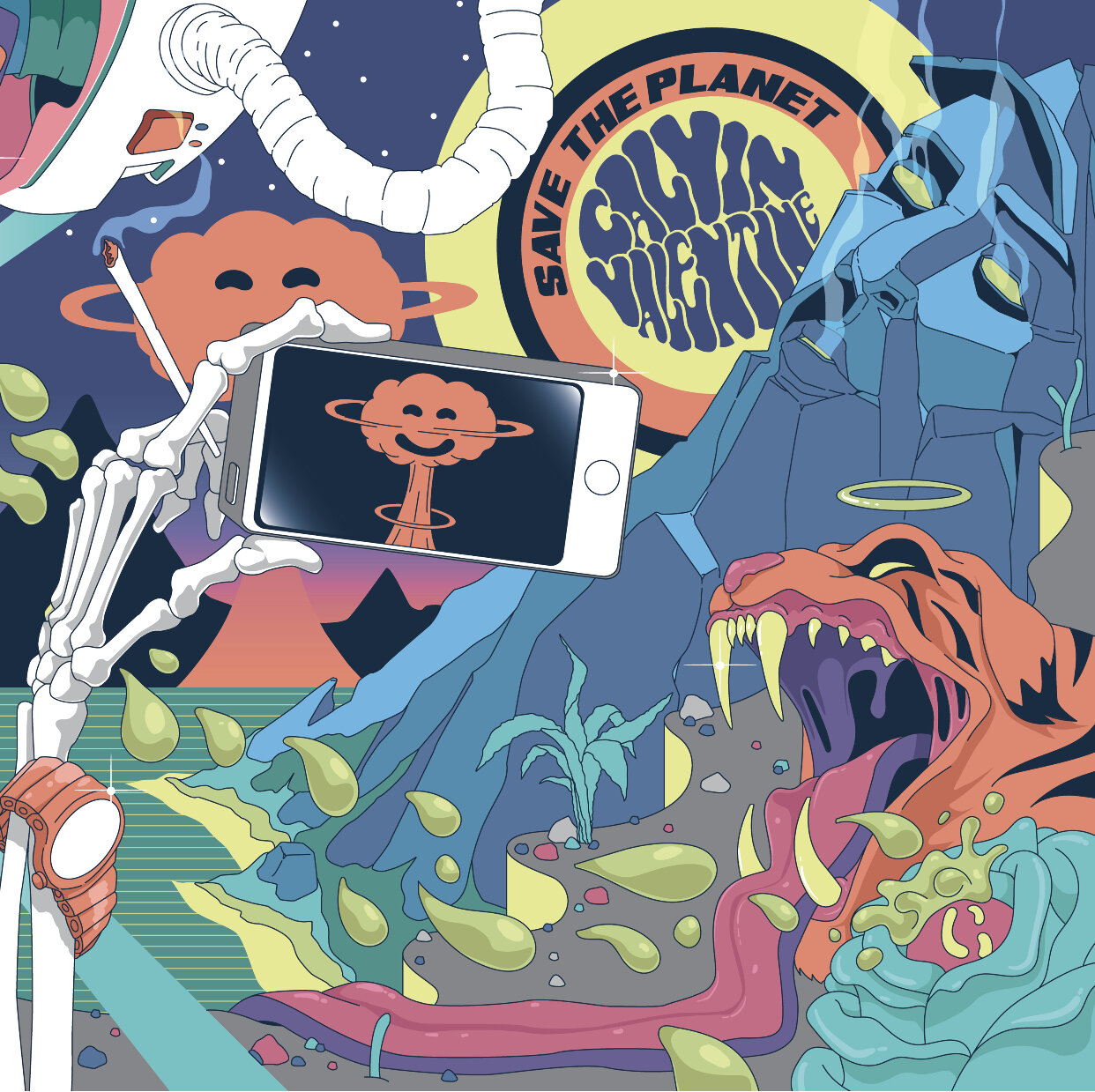 This extended play was released on Earth Day this year, hence the title. Calvin Valentine released one of the most slept on albums of 2019 with Napkins, so I wanted to make sure I covered his newer work to give it as much shine as possible. I don’t really know much about this project aside from the eco-friendly theme, and the fact that it was recorded in 2019. This could be an instrumental project for all I know, but I doubt that’s the case because the song lengths don’t look that short. Anyway, I’m expecting this to be really dope. Every song is produced, written, mixed and recorded by Calvin Valentine.

The production here is pretty nice. It’s a very traditional sounding instrumental, but I wouldn’t label it as Boom Bap. The reference to Masta Ace on the hook is dope, and the first verse was good. I really like the record scratches from Celly too. The second verse is a step up from the first one in my opinion, but I don’t think he was really rapping the same way he was on Napkins here. This performance seems much more laidback. He even kinda addresses it at one point during the second verse.

I’m no hot rhymer
I’m just a pothead whose beats are hot fire
Underground always, and make this Pop money
Laugh my way to the bank, but y’all are not funny

I still enjoyed the rapping here though. It’s a smooth track. It’s just really nice and laidback, and I think Calvin knows how to flow over his own production very well. I really like the hook here too. This is a dope song.

This track is a bit more energetic than the opening song. Once again, the scratches from Celly are a really nice touch here—spoiler: all Celly’s contributions throughout this entire project are great. The beat here isn’t as entertaining to me as the preceding one, but it’s not bad at all. It actually kinda reminds me of the Fresh Prince of Bel-Air theme song. I like the relatively aggressive rapping from Calvin here. His delivery is still laidback like it always is, but his flow and rhymes seem more proficient. The sexual content of the first verse isn’t very appealing to me, but I like the song enough sonically to look past it. The hook is nothing special to me honestly, but the second verse is really dope. It’s even better than the opening one in my opinion.

Never wore a Pelle Pelle, but had the Outkast jeans
Carolina cap, blew that dream
When I didn’t make the team, music was my thing
I was smokin’ all that green, wanted all that bling
Wanted everything, but not a piece of mind
Now they need a piece of mine when they see me shine

I like the rapping on this track more than that of the previous song, but I prefer the preceding instrumental. The song’s still very good to me though; I fuck with it.

I really love the production on this track; it reminds me a lot of the Big Poppa instrumental, but it’s different enough to not feel like a recreation of the song. I like the way Calvin was flowing here a lot too. I feel like this song would be good to listen to first thing in the morning while eating cereal after taking a bong hit. It sounds like happiness. The content isn’t super deep or interesting. He’s just rapping about smoking weed and having a good time. It’s very well done though. He sounded very good on the verses, and I really like the hook too.

I actually like this track more than the first two songs on the project. It just sounds like a really good time. It’d be nice to have on in the background while hanging out with my friends when I’m not tryna worry about anything. This shit is dope.

This song has another very delightful, pleasant, joyful sounding instrumental. This one’s a bit jazzier than the preceding one though. I really love it. The hook is really fun too. I don’t know why, but this song just feels really wholesome to me. It just sounds like pure elation in the form of a song. The first verse was really nice, and the second one’s even better.

It feels like we chasing forever
I’m gon’ get my shit together, gettin’ better with time
Perfected the rhyme in sunny weather
Come from the rain and now I’m doin’ better

If he wasn’t rapping about getting stoned, I feel like I’d want to dance with my baby daughter to this song. Either my daughter or my mom. I don’t have kids by the way, it was just a hypothetical scenario. The way the beat switches up for the outro and sounds more R&B-ish is really nice. The scratches from Celly are a really nice touch too. This is definitely my favorite track on the project. I think it’s dope as hell.

This song has another really chill, super smooth beat. The opening verse from Calvin is pretty solid, but I focused more on the production and his rhymes than anything else. The actual content of what he’s saying didn’t really stick with me. I really love the vocal sample that comes in after the hook. Neither of the verses really stood out to me that much personally. I mainly enjoyed this song from a sonic aspect. I really like the hook, and the production here is pretty nice too. The verses aren’t bad at all to me. I don’t think any of the lines were wack or anything. He was rhyming well, but the content just wasn’t super interesting. The song is dope though; I fuck with it.

This beat is a bit more hard hitting than that of the preceding track, but it’s still pretty smooth. I feel like the majority of the beats on this project sound very 80s-ish. I’m not sure what these samples are, but that’s what they sound like to me. This shit sounds great though. I really like the way Calvin flowed over it on the very first verse. Once again, the lyrical content kinda goes in one ear and out the other. This isn’t really the kinda shit that I’d pay too much attention too. It’s just nice shit to have on while driving around with the top down on a warm summer night with the wind blowing against my ears. I would’ve said “blowing through my hair” but under normal circumstances my hair isn’t long enough for something like that. Anyway, this is another really dope, lighthearted song that elicits joy. I fuck with it.

This song has my favorite beat on the entire project. It’s super jazzy, and very comforting. The sax sounds fucking amazing. The opening verse was nice too. The simplistic hook is pretty cool; I really love the record scratches from Celly. The second verse was solid too, but I honestly just enjoyed this song because of the production and overall atmosphere. I think Calvin sounded good rhyming over this beat, but the lyrical content pretty much went in one ear and out the other. The screwed outro on this song was fucking amazing by the way. That shit sounded fantastic. This is easily one of the best songs on the whole EP. I think it’s dope as hell.

I think this project is great. I mainly enjoyed it just due to the production, but I think Calvin sounded nice rhyming over these beats. My one major gripe is the content. When I saw that this project was called Save the Planet, and that it was being released on Earth Day, I was assuming that the content would revolve around the climate crisis, but that’s not the case at all. It’s pretty much just more of what he always does: music about smoking weed and having a good time. It’s not a huge issue obviously since I still think it’s a great project, but I did find it odd, and I’d be remiss for not mentioning it. As I said in my review of Napkins, I typically don’t like this kind of Hip Hop that just focuses more on a chill, pleasant aesthetic without any really thought provoking lyricism, but I just think Calvin does it really well. He’s able to flow and rhyme well enough to keep my attention, and the production is always really great. I think this shit is dope.