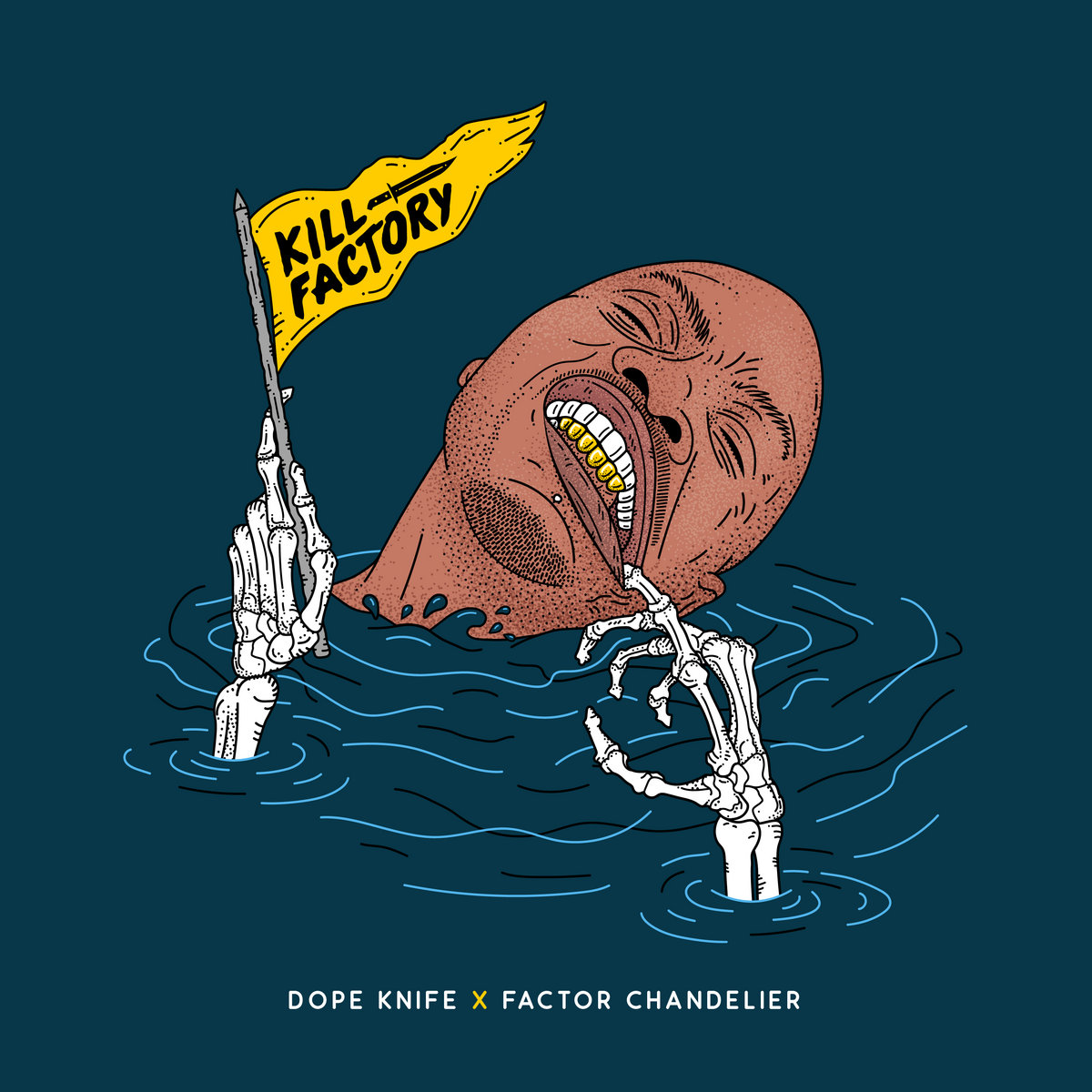 This extended play was released on June 5th this year. Kill Factory is a newly formed duo consisting of Dope KNife & Factor Chandelier. This project was announced near the end of May, but I honestly kinda forgot that it was happening, so I was pleasantly surprised when I got an email about it on Friday at midnight. Dope KNife released one of my favorite albums of 2019, as well as one of my favorite extended plays of 2020, and Factor Chandelier has produced the three best albums Ceschi has ever made in my opinion. Because of all this, I’m expecting this to be one of the best projects of 2020. I’m gonna remain cautiously optimistic though. Every song here is produced by Factor.

This beat is a bit harder than what I usually expect from Factor, but it still sounds very polished. Dope KNife fits over it perfectly. The first verse is great.

I don’t pass piff, I drag ’til the last hit
Blade in my hand, hold metal like a blacksmith
Dab hits, got ‘em like “you can’t be this ill”
Kill Fact’ stay hard as adamantium steel

The hook on this track doesn’t really stand out to me very much at all, but it’s not bad. It pretty much just gets the job done. The second verse is even better than the first one in my opinion.

I’m better than a veteran
Jettison your body ’til the cops is like “forget it then”
Then I’ll kill myself to go to hell and leave you dead again
Rappin’ on a level most you motherfuckers never been
‘Cause most the shit that I’m hearin’ is still wacker
Fuck that, give me a beat to kill, Factor
Craft a blade so I can stab you with
Have you hit, OGs saying “Goddamn, you sick”

This shit is indeed very sick. I was actually more impressed by Dope KNife’s rapping than the production from Factor here. I was kinda hoping that the beat would become more detailed, but nothing about it really stands out that much aside from the hard hitting percussion. I definitely like it though. The song is really dope to me.

The production on this track is definitely a step up from that of the preceding song in my opinion. It still fits Dope KNife’s style very well, but it feels a bit more detailed and layered. The opening verse is great.

Nigga, we the opposite
You rappin’ to make a profit quick
I’m just a prophet who really needs a psychologist
Wack niggas who copy shit
I gave ‘em a slash
I ain’t tryna make it obvious, I’m takin’ a chance
This is for the graff writers who escape in a flash
‘Cause they name’s up and cops keep chasin’ they ass

The hook on this track is definitely more interesting to me than that of the preceding track, but it’s still not amazing or anything. I fuck with it though. The second verse is really dope too.

We all royal, kiss the rings
I’m a mystery, but you a myth to me
Rhymes, I spit them shits like Listerine
Drunk, stuck on the bottle like Mr. Clean
Punk, my words are hollow; clip 16
And now you gotta follow in the kid’s sick dream

I really fuck with this track. It doesn’t have my favorite beat on the project, but I definitely like the instrumental, and Dope KNife killed it. This shit is really dope.

This song has the first instrumental on the project that I really loved. It’s relatively slow paced, but the percussion—especially the bass—is very heavy and hard hitting. Dope KNife fucking killed it too. I love how he switched from a lowkey yet tense sounding delivery to a super angry sounding style for the last couplet of the opening verse.

Get the FUCK outta here with that wack shit
Step your bars up, talkin’ ‘bout practice, bastards

I also think this track has one of the better hooks on the project. Obeah was featured on my favorite song from Dope KNife’s 2017 album, so it was cool to see him here again. The fucking yodeling ad-lib that came in after his first couplet really caught me off guard, but it was fucking hilarious. I love how weird and creepy some of his lines were too. Usually rappers will try to come off as evil and murderous, but it’s rare for them to go for the creepy, weirdo thing.

Burnin’ American flags
Swervin’ and wearin’ a mask
Creepily starin’ at dads
Pickin’ up their kid from class
Always makin’ families uncomfortable in public
But that’s just who I am, if you weren’t numb then you would love it

It is super weird and unexpected, and I suppose it’ll be hit or miss depending on who’s listening, but I liked it. This is definitely a highlight on the project for me. I think this track is dope as hell.

This song has another one of the better instrumentals on the project in my opinion. A lot of it has to do with the additional piano & violin contributions from The Pxrtals. It’s more uptempo than the preceding track, and I think Dope KNife’s rapping here is great.

I wasn’t crazy about the hook at first, but it grew on me after a few listens. The first verse was dope, but he really snapped on that second verse. His flow was crazy, and he was rhymin’ his ass off. This is the longest track on the project, but it didn’t feel that way. In fact, I wouldn’t have minded hearing one more verse. This is a major highlight for me. I think this track is dope af.

This song has another really great beat for Dope KNife’s style. I think this super dark, gritty, grimy sound works perfect for him. This is the shortest track on the album, so there’s just one verse. It’s fucking awesome though. I feel like the beat itself is kinda simplistic, but I still really love it. I can’t explain exactly what it is about this beat that I love. It just sounds super dirty and gravely, so I guess that’s why I fuck with it so much. I love beats like this. Dope KNife killed it too.

If I turn up, cops might put a shell in my top
To them I ain’t nothin’ but a fuckin’ melanin blotch
And I’m just lookin’ for a shell I can shock
I got bright burned up, boo, your melanin pop
My manager screamin’ “why the fuck you rhymin’ this for?
All this dumb shit’ll get you kept outta Pitchfork”
Try to hit ‘em with some other shit, then I get bored
Fine, I’m not responsible for any discord

I liked that line about him being unable to go to a movie theater without a white boy shooting it up. He said it a different way, but that’s basically what he meant. This is another highlight for me. I love the simplistic structure, the production is fire, and Dope KNife killed it. This shit is dope as hell.

This is another really great project from Dope KNife. I was a bit worried at first because the first couple beats were relatively dull in my opinion, but thankfully I was very satisfied by the time the project ended. As I kinda mentioned before, I think Dope KNife sounds best over super grimy, dirty production, so that’s why I loved the last couple songs so much. I think Dope KNife and Factor are a really good pair, but I also really love Dope KNife’s production. I think a full Dope KNife album would ideally be 50/50 for me. Half Dope KNife beats and half Kill Factory songs. I’d be happy with either one though. As long as the production’s dope I don’t care who’s responsible. I don’t love this quite as much as the Dope KNife’s latest solo album or the EP he dropped a couple months ago, but I still think it’s some of his best work. It’s my third favorite project that I’ve heard from him, which is saying a lot whether it sounds like it or not. This shit is super dope. Don’t sleep on it.