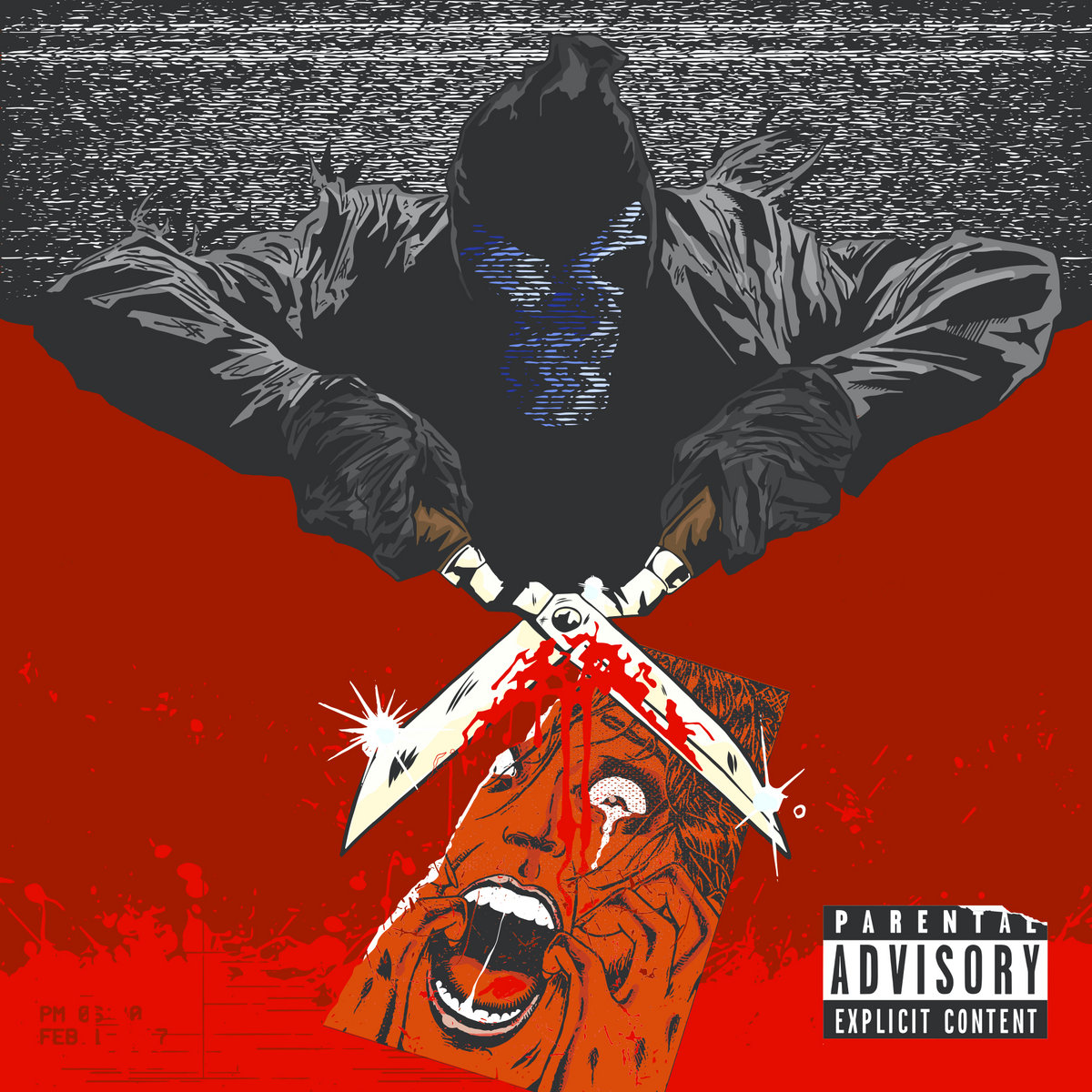 This extended play was released on March 9th this year. Ransom is an MC I’ve been listening to ever since 2013 when he dropped his mixtape hosted by Big Mike entitled The Alternative. I loved that project, and ever since then I’ve considered him to be an elite level MC. He’s super under-appreciated, and he’s been wrapped up in some controversy over the years. There are claims that he was a ghostwriter for Nicki Minaj, which may or may not be true. I’m not gonna touch that one. Although I will say real quick that I’ve never heard a single performance from Nicki Minaj that can touch Ransom’s skill. I’ve always been confused about why people don’t seem to pay more attention to Ransom because he’s an incredible rapper. I guess I haven’t exactly helped at all though since I haven’t covered any of his projects. I like almost every project he’s released over the past 7 years. My favorite thing he’s ever done is his 1% EP, which dropped in 2017. That shit was borderline amazing. Definitely be sure to check that out if you haven’t yet. He followed this latest project up with a sequel called Director’s Cut: Scene Two, so be on the lookout for a review of that sooner rather than later. Anyway, I’m expecting this to be one of the better EPs of the year. Hopefully I’m not let down. Every single track is produced by Nicholas Craven.

This shit is fire. It’s probably my least favorite song on the project overall, but that’s more of a testament to how incredible this EP is than anything. The song isn’t really any worse than the others to be honest. It’s just got my least favorite beat. The production is still very good though. And goddamn… Ransom is a fucking monster, man. I feel like my reaction to his performances here were very similar to my reactions to Mavi’s Let the Sun Talk album. He spazzed on every single verse here.

First time I seen a face explode was about 8 years old
My mother prayed so she can save my soul
It changed my goals seein’ brains exposed, no one explained it though
Everything is lit when you livin’, but your grave is cold

The entire project is like this. It’s just an onslaught of God level rhymes and flows. Much like the aforementioned Mavi album, there aren’t really any hooks on this project. It’s just a ton of rapping over really well-crafted sampled-based instrumentals. I think that’s a good thing though. I don’t think adding a hook really would’ve made this any more entertaining than it already is. If anything it’d just feel like a waste of time. I’m almost positive I’d be eager to get back to the verses. This shit is fire though. The song is dope as hell.

As far as production goes, this is perhaps the most exciting song in the track listing. It’s mainly because there are three different beats in this one track. It’s more upbeat than the opening song too. Of course Ransom was spazzing all over this joint.

I was so caught off guard the first time the beat switched up too. I was already amazed by what I was hearing, but Nicholas Craven somehow pushed it to the next level. That second beat is incredible too. I don’t know what I’m more impressed by: the rapping or the instrumental? The second beat is my favorite part of the song in terms of production, but the third beat is great too. I know I’ve heard that sample before, but I can’t remember who rapped over it. At first I was thinking Jay-Z, and then I thought of Joell Ortiz. I don’t know. I’m positive it was a New York rapper, but I suppose I could be wrong. It doesn’t matter. This shit is fire. Ransom sounds perfect over it.

The streets got ahold of my senses, and my only defense is
I was cold and relentless, hoppin’ both of them fences
By the grocery entrance, I ain’t supposed to be senseless
Product of my environment, how they gon’ hold it against us?
Stuck my nose in the trenches, the devil’s work is done
And I was his chosen apprentice, sellin’ dope on the benches
Kept it 100 even when niggas spoke with resentment
I’m hopin’ you meant it, flow is crazy ’cause every quote is demented

Bro, if I could rap like this dude I would have the biggest fucking ego on the planet. I would never stop rapping ever. I would just constantly be flexing on other MCs. I love when an artist is so good at what they do that it makes me feel like shit for being talentless. This dude is a monster, and this song is amazing.

3. Based on a True Story

This song has another phenomenal instrumental. As the title of this track hints, this song is a super vivid story, and it’s awesome.

Go see my nigga Sean, he was fresh out
He told me “Ran, you the best out”
That’s right before Crazy Rick pulled his TEC out
Shots was fired, Sean hit the pavement, he squeezed my hand as he bled out
Dark figures in hooded silhouettes keep my pillows wet
His widow’s left with two little soldiers, I wish those kiddos best

The vocal sample that comes in after Ransom says “it’s all over” sounds so fucking glorious too, man. I fucking love it. There’s not really much I can say that I haven’t already said yet. Ransom’s performance here is marvelous, and the production is absolutely stunning. This shit is dope af.

This is my favorite song on the project. I just really love this beat. It’s a very gorgeous and somewhat emotional sounding instrumental. I think it’s amazing. Ransom’s performance over it was superb too.

I swear I seen a devil in clothes
He said, “ain’t nobody livin’ that’s innocent, nigga ball out”
The bottom’s like the top, I’ll be there when everything falls out
Forget your inhibitions, no virgins live in this whorehouse
It’s like Cosby walkin’ through Moorehouse
You sleepin’, I’ll be tempted to victimize you, I mystify you
Hero to these poor black males who failed and the system lied to
Been a rebel, so why would this surprise you?

That line about how he went to prison and told his kids that he was just going off to college was crazy. It’s yet another amazing song.

This song is technically only on the Bandcamp version of this project, but it’s just as superb as the other material, so I wanted to make sure I mentioned it. The production is very pretty, and, as always, Ransom’s performance here is godly.

I’m from an era when
Bootleggin’ DVDs might’ve been thought better than
Half a career in medicine
I’m from an era where
A pack of Newports, a pint of some Everclear
Will take away pain as if it was never there
My every vocal is carved with a diamond, the Harvard of rhymin’
The stars is alignin’, that’s marvelous timin’
Far from a street rapper, I’m Langston Hughes with a tainted view
You soft as a hymen, I’m breakin’ pussies, too late for rookies

Once again, he spazzed out on this track. There’s also a remix available on Bandcamp, and I might actually like it more than the original. The beat sounds more lighthearted, but it’s just as soulful and pretty. Both versions of the song are dope af.

This is the best project I’ve ever heard from Ransom, and it’s also the best project I’ve heard so far in 2020. I seriously think Ransom & Nicholas Craven are a perfect pair for each other. These sample-based instrumentals are genuinely beautiful, and Ransom was operating in rare form throughout the whole extended play. There’s not a single blemish here. I’m so happy that they’ve already released a second EP, and I’m hoping we get a third sooner rather than later. This shit is incredible. If you haven’t heard this yet, you’re fuckin’ up, but I understand because not enough people are talking about it. However, if you’ve read this entire review and still don’t plan on checking it out, you’re really fuckin’ up. This shit is fucking incredible.