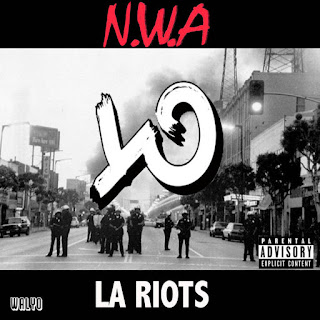 After some success with 2018s Dipset We Still Bangin, producer WalyO returns with the first release off his forthcoming Dr Dre Detox album. LA Riots has the Connecticut beatsmith bringing back legendary gangsta rappers Dre, MC Ren, Ice Cube and even the late Eazy E, together again over a dope West Coast style piano production. He also grabs the RnB king Michael Jackson to help set the tone of the track.

If you aren't familiar with WalyO, he is somewhat of a new age Amerigo Gazaway and Tom Caruana. Instead he doesn't make remixes, he more so takes miscellaneous acapellas from all sorts of tracks and chops them up/rearranges them and forms a brand new verse and hook. This innovative form is what WalyO hopes to separate himself from the other remixing producers/DJs. In his own words, "I'm not trying to dupe or lie to anyone, I'm simply wanting to give fans the songs and projects they've been yearning for but in my own version."

Take a sec, peep the single and stayed tuned for WalyO's Detox and hopefully your ears can be fulfilled.