EP Review | Vice Souletric – The Reality of All People 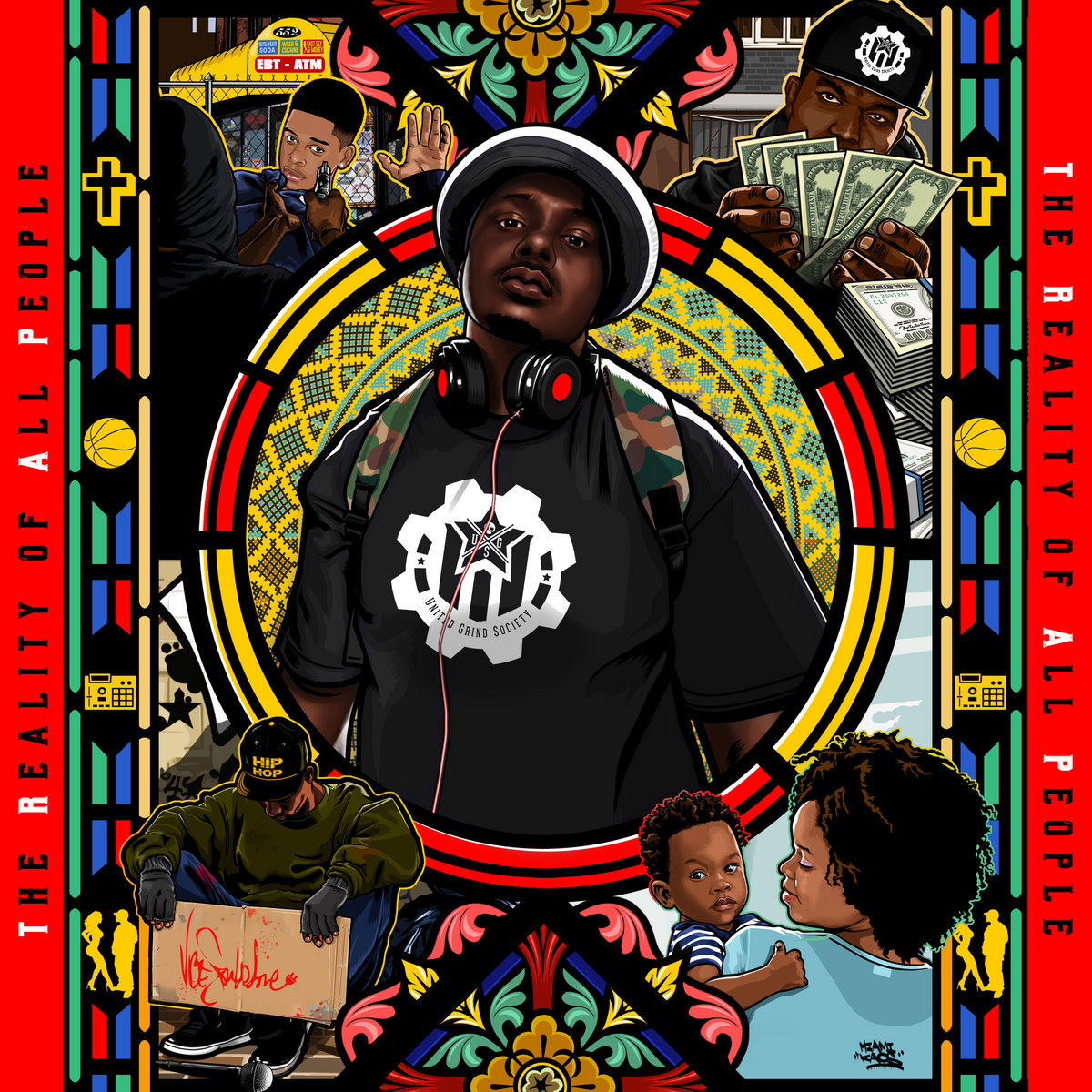 This project was released on June 16th this year. Vice Souletric is a rapper and producer from Lorain, Ohio, who I know next to nothing about as of June 29th. This EP is entirely produced by DJ Flash, which is the main reason I’m checking it out. I didn’t know exactly who DJ Flash was at first, but his name sounded very familiar. I was soon informed that he’s actually the DJ for Little Brother, so that was all I needed to hear in order to decide I was gonna check this out. I’m pretty much going into this completely blind, so I don’t have many expectations. I’m optimistic though.

This is a quick mixtape-style intro in which DJ Flash just gives a bunch of shoutouts. It doesn’t really add much to the project for me personally, and it’s not something I’m gonna keep in my library, but I’m not gonna pretend to have an issue with its presence here.

This is one of my favorite songs on the project. I think the celebratory sounding production here from DJ Flash is fantastic. It was cool that the song began with audio of Vice performing at A3C too. The opening verse is great.

One of a kind, any comparisons that come into mind
You get embarrassed when you come into mine
I guess the only real comparison’s wine
‘Cause a nigga just get better with time
With no help, even Loretta Devine

The whole song has a certain atmosphere that makes me feel like I’m at a live show, especially when the hook comes on. I guess it probably has a lot to do with the sounds of crowds cheering in the background. This track in particular reminds me of 2000s underground Hip Hop, like Talib Kweli, or… Well… I guess Little Brother lol. The melodic hook is pretty catchy. He’s not really an amazing singer or anything, but his voice isn’t bad enough for it to tarnish the song. It’s sufficient. His voice kinda sounds like Lloyd Banks; the main difference is that it doesn’t sound like he’s in his 40th year of puberty. Overall, I think the song is dope as hell.

This is the only song on the project that I don’t really care for. I don’t think it’s a bad song, but it’s not something I’d listen to again. The lyrical content doesn’t particularly interest me, and I’m not crazy about the sung hook. The beat is cool, but not really anything to write home about honestly. The verses aren’t poorly written or anything. This just isn’t my kinda song.

I know your ex-lover bitter
He thinkin’, “I know another G done got with her”
‘Cause your pedigree is thick, you the pick of the litter
So while other brothers is sleepin’ on your plus size
I’m receivin’ it like kickoff after touchdowns

I don’t think this is wack or anything, but nothing about it stands out much to me. It’s an okay track, but, like I said, it’s not something I’d return to. I think it’s decent though.

This is a relatively weak track on the project in my opinion, but I do like it to some extent. I just feel like it’s about 30 seconds longer than it needs to be. The melodic hook is cool, but it gets painfully old by the time the song finally ends. The production is thankfully very dope, and the storytelling from Vice is good too.

Caught in an eyewitness account, the boy was on his way to school
All black SUV rolled up next to him and took him out
Fell lifeless on the front yard greenery
Three hours ‘fore paramedics hit the scenery

The second verse is even better than the first one in my opinion.

Area business owners glocked up
In an attempt to be ready when intruders pop up
Makes sense, but it makes for a war zone
Not a community you proud to call home or own

It’s a good song, but, as I said, the hook gets super tedious by the time the track ends. I still enjoyed it overall though.

I really love the production and lyrical content of this song. The beat sounds very warm and sentimental. The song seems to be dedicated to Vice’s loved ones, particularly his parents. I think the songwriting is very heartfelt. The one aspect of the song that most people would probably take issue with is the hook. It doesn’t exactly ruin the song for me personally, but I will say that if someone told me they hated it I would probably understand. The melody is pretty good and very wholesome. It’s just… There are children singing along in the background. 99% of the time, whenever I hear kids singing, I immediately turn the song off. However, this feels more organic and fitting. It’s not one of those generic children’s choirs. I kinda fuck with it personally to be honest. I think it fits well. It’s kinda like when Nas had those kids on I Can… from God’s Son. This honestly sounds less corny than that to me. There’s really only one verse on this song, but it’s very well-written.

Love in my household, yo, I never lacked
Cherished family, and friends always had my back
I remember that, so I reciprocate
Whether you know me as Vice or Nicholas Gate-
-wood, you give me a chance to show love
I wanna give it to all the above
Here are your flowers

I fuck with this track. I think it’s dope.

6. Father in My Life

This is one of the major highlights on the project for me. When I first listened to the project, Real Hip Hop was my favorite song, but I think I might actually prefer this one. I love the beat, and I think Vice’s flow here is more entertaining than it is on a lot of the other tracks. As the title of the track indicates, the song is about Vice’s relationship with his father.

It was kinda weird, ‘cause, like, all my peers
Said they fathers disappeared, ain’t seen them niggas for years

I think this track has one of the best hooks on the project too. This is technically the longest song on the EP, but its length doesn’t feel unjustified. The second verse is just as good as the first one, and the music video is super heartfelt as well. I really don’t have any gripes with this track. The song is dope as hell to me.

This is a 40 second Spoken Word interlude, and it’s actually pretty dope. It’s a good lead-in to the closing track, and I think it sums up the theme of the project very well. The acronym for this project is TRAP, so here he kinda discusses how all people are more or less in the same trap. It’s not something I’m gonna be scrambling to listen to in the future, but I appreciated it.

This is another major highlight on the project for me. I think it has one of the best beats on the whole EP. The piano loop kinda sounds like something Daringer might cook up, except it’s way smoother and more soulful. The opening verse from Vice is really nice, and I think this track has another one of the best hooks. It actually might be my favorite one. His singing isn’t particularly good, but it’s sufficient. The second verse is far more enjoyable to me than the first one.

It was hard for me to decide which song I preferred between this and Father in My Life. I think they’re both really great. I will say that one nitpick I have is how abruptly this song ends. It feels kinda strange, especially since this is the final track, but it’s not a huge deal. I think this shit is dope as hell.

This project is pretty great. It kinda felt like an old, early to mid-2010s mixtape. I was waiting to hear “DATPIFF DOT COM WORLD PREMIER” at the end of the Flashtro. I don’t really have any major gripes to be honest. I think DJ Flash’s production here is very good, and Vice is a very good writer. I guess some of the hooks became a bit tiresome just because of how repetitive they were, but aside from that I didn’t have many complaints. I think he’s at his best when he’s focusing on a specific concept or theme, such as his parents. I’m glad I checked this out, and I’m looking forward to hearing a full album at some point in the not too distant future, and it’d be cool to see more music videos as well. This shit is dope. Check it out.