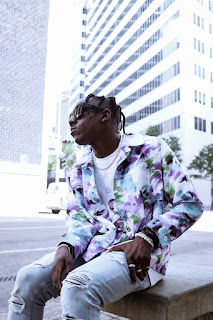 Texas artist Number3ok drops off the new project "3:33" now available on Apple Music, Spotify, & more. Playing both the role of producer and rapper, Number3ok slides over his own production packed full of 808's and exciting melodies. With a laid back flow and quick wordplay, Number3ok gets the job done without ever going overboard on either the beats or the raps. On "No Trends" Number3ok reverses the samples and adds some tasteful 808's before gliding over the beat with his smoke out raps. For fans of Pi'erre Bourne, Wiz Khalifa, and more - Number3ok shows the potential to be a household name on his latest release "3:33." With every song clocking in around 2 minutes, Number3ok almost leaves listeners yearning for more but at the same time never overstays his welcome on one song. Putting on for his own home state of Texas, Number3ok is one of the new artists helping usher in an innovative sound to Texas' well-known Rap history.
Press play on the official playlist "3:33" by Number3ok now available on Spotify, Apple Music, and more and be sure to follow this rising artist on Twitter for more updates.
Apple Music:
https://music.apple.com/us/album/3-33/1530112919?uo=4&app=music&ct=FFM_62b628d37eb1bfc98a791e2496218aa4&at=1000l339
BIO
Exploring the versatile Texas music scene, it's safe to say that dancing is synonymous with the groove that each city carries in The Lone Star state. Most would say that Dallas is the "Jigg Capital", but it seems as if Houston is serving as a hub for the innovators of the modern Dougie inspired sound. Artist/producer Number3ok serves as one of the architects to help expand that vision in H-Town.

The key guy behind the boards along with being effective on the mic, Number3ok has established a unique lane for himself. As he favors the anthem-like sound in his material, he also makes sure to slide witty wordplay + contagious groove in his hit-making catalog. You can find this clearly on his new body of work, "3:33", which is an essential party playlist from start to finish. The fully self-produced effort makes the special experience of 3:33 an addicting ride of hit singles but an appreciation of how forward-thinking Texas music is becoming. As the state continues to push boundaries, look for Number3ok to be one of key players in its evolution.