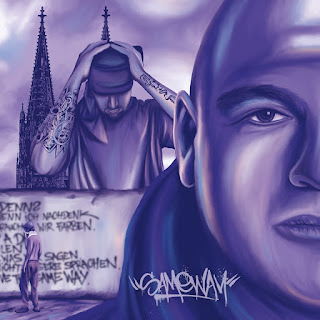 Mic Bles unearths a relic from the past: “Sameway!”
As far away as California and Germany might seem (Oxnard, California MC) Mic Bles and German producer "BigLip" find common ground on Bles's new album aptly titled "The Sameway":
The transition between local act and becoming internationally recognized and respected is what most artists vie for, but few actually accomplish. Mic Bles and Executive producer Hustle One traveled to Germay in 2008 with that perspective in mind. As fate would have it Bles and Co. landed in Bonn, Germany and teamed up with producer "BigLip" to record this project during Bles's first European tour: and as legend would have it they completed a classic album and video in 9 days!!
This unreleased gem has been locked away ever since, until now!
Sonically, the project is a mix of boombap tracks and soulful, sample-filled joints that serve up 11 dope tracks that combine for a cohesive blend that makes for some timeless music.
The ox emcee draws inspiration from his travels abroad to the hustle and struggle of the grind in doing so. Throughout the album Bles combines rhyme schemes and thought-provoking bars detailing his outlook with raw street corner aesthetics.
The album has several notable appearances from Simon Grohe, Pete Boxx, and Dj Kid Rush with all featured MC's rapping in German. Each featured guest compliments the album by adding there perspective on the topics at hand as well as finding their commonality on the subject even if they are from a different part of the world, thus the title "The SameWay".
Sameway serves as a time capsule that plays as a soundtrack to this time and is a captivating foray into Mic Bles's journey across the globe.