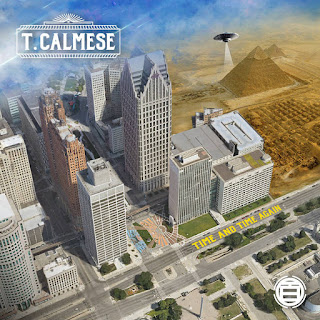 Detroit rapper T. Calmese (of creative counter-culture collective The Black Opera), releases his debut album Time And Time Again, along with a free download of the album single "Play On Player", exclusively on Bandcamp. Produced by 14KT, "Play On Player" is the album's celebratory second track, contrasting with the dark and menacing album opener "Almighty".
"We put a lot into this album. For that reason, this moment is a celebration for us. No song captures the sound of celebration on 'Time And Time Again' better than 'Play on Player'." - The Black Opera
As the album title suggests, "the more things change, the more they stay the same". Time And Time Again explores this concept using elements of Sci-Fi and Afrofuturism (inspired by Lovecraft Country, Watchmen, and the like) to tell the story of an everyday man communicating with himself across time. His future self reaches back in time to inspire his past self to leave voice notes with advice to help him through life. The therapeutic process mirrors how society's history, and the way it has been documented across time, informs our world's current movements and struggles.
MORE ABOUT T CALMESE:Formerly known as Illite of the Subterraneous Crew (OneBeLo et al), Detroit native emcee T. Calmese has released several solo mixtapes, as well as collaborative albums with fellow Michigan emcees Octane (currently known as Ro Spit) and Vaughan T (of Athletic Mic League). As the newest addition to the creative counter-culture collective and record label known as The Black Opera, Calmese enters a new phase of artistic reinvention with his official debut solo album Time And Time Again. The project uses the static interpretation of time to tell the tale of an everyday man navigating his way through life's ups and downs, while asserting himself as one of Michigan’s most skilled and seasoned wordsmiths.
More Info:Facebook | Twitter | Instagram