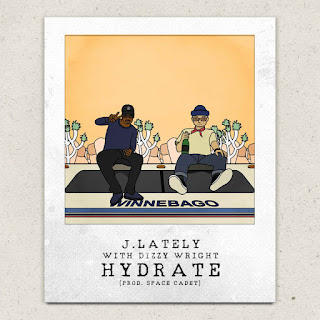 “Hydrate” has a cinematic feel - thanks to J.Lately’s long-time producer, Space Cadet - which transports one's mind to a slow-motion montage of live show footage, life on the road, and behind the scenes antics from two of the hardest working touring acts in hip hop. The song is the second single off of Lately's upcoming album, Winnebago, which is slated to drop in early 2021. Both J.Lately and Dizzy Wright have had their foot on the gas, despite the madness 2020 has thrown at us all, and this offering is a clear sign that other than a quick stop to hydrate, nothing’s going to slow them down.
Tracklisting for the "Winnebago" album [releasing early 2021]:
1. Home or Away
2. Hydrate feat. Dizzy Wright
3. Winnebago
4. Parachutes
5. Detours feat. Junk
6. Watches
7. Out The Window feat. Gavlyn
8. Nothing
9. Like You
10. No Vacation
Connect with J.Lately
Website | Instagram | YouTube | Twitter