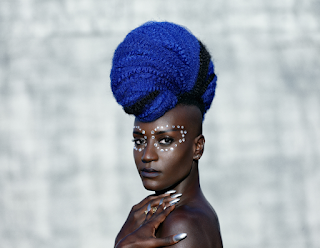 Caroline/Capitol Music recording artist, Marieme today releases her new music video, “Freedom” after releasing the trackin October 2020. “Freedom” is the follow-up to her breakout song, “Leave”.
“Freedom” exclusively premiered with Flaunt who lauded the new video saying, “The song…is paired with an explosive animated visual — making a statement that freedom should not be taken for granted.”
In the music video Marieme’s digital avatar walks gracefully and powerfully through a dark rendered 3D environment. The video focuses on the decaying statue of confederate general Robert E. Lee, which explodes, being replaced by an angelic golden version of Marieme in an allegory for taking back her power.  She views this song as a call to action for all people but more specifically for her black brothers and sisters.
Marieme decided to enter the digital world so she wouldn't be confined by the restrictions of COVID and can explore her art with no limitations. She created a 3D scan for her digital avatar with Human Engine a 3D asset creation company, and the amazing creator Dave Dorsey who directed and brought the vision to life.
Marieme tells Flaunt about the inspiration behind her new music video, “‘Freedom’ is infinite, it has no bounds. It’s everything and nothing, it just is! This video’s for everyone but I wanted to make a powerful piece of art to help liberate the black community further, because our trauma is still prevalent and it’s important to have reminders of who we really are and the power we came from!”
She continues, “This music is more important now than ever, people need to know that they have the power! This is the time where we shift the energy of the world, to create a better world. With everything going on from the protests to the elections, people are beginning to mobilize and be motivated, they’re beginning to understand where the power lies, it lies with the people! We are the people! We’re organizing in the name of all the people that have been taken from us.”
With her motto of “Consciousness is the new Rock-n-Roll”, Marieme is part of the rise of the anti-diva; artists ranging from Adele and Amy Winehouse to Solange and Janelle Monae who have recreated the diva paradigm in their own distinct images using their unique voices and personas to share the particular complexities of their existence.
As a contender in this illustrious group, what sets her apart is a combination of a bold, expressive multi-octave voice and her individual perspective as a socially-conscious world citizen, singer, and songwriter. She says: “I feel like this song is a coming-out song for me and I feel empowered listening to it as much as writing it. I want everyone listening to it to feel empowered and be the catalyst to the change we so desperately need in this world.”
This dynamic, innovative, buzzed about singer/songwriter is a presence at once as glamorous as she is brutally honest in her music. Marieme was influenced by the iconoclastic greats who created their own lanes: Erykah Badu, Dusty Springfield,
Aretha, Nina Simone, Billie Holiday, Lauryn Hill, Sarah Vaughn.
Freedom is the precursor to a full EP scheduled for release in 2021.
﻿Follow MARIEME
Instagram
Twitter
Facebook