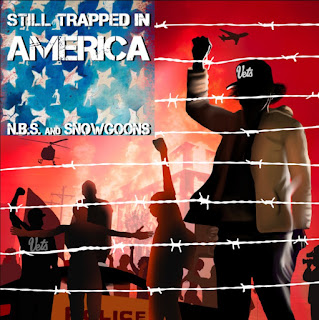 'Still Trapped In America' is the sequel to 'Trapped In America', an album that was released in 2015. 'Trapped In America' dealt with the injustices in America, mass incarceration, police brutality and racial profiling.Today, 'Still Trapped In America' focuses on police killings, racism and the Trump administration's way of governing. From deaths like Eric Garner, Sandra Bland, George Floyd, Breonna Tyler to now Walter Wallace: N.B.S. x Snowgoons bringing awareness in unfortunately, perfect timing. Times have gotten worse since 2015. More deaths, more division, more public racism is spewed around the United States. With hopes to show unity and protection of young black Kings and Queens around the world N.B.S. gives a heartfelt in depth look into these issues first hand.
eMail: promo@snowgoons.deWebsite: www.snowgoons.deSpotify: https://sptfy.com/LvcFacebook: www.facebook.com/snowgoonsmusicTwitter: www.twitter.com/snowgoonsInstagram: www.instagram.com/realsnowgoonsYoutube: www.youtube.com/user/Snowgoons