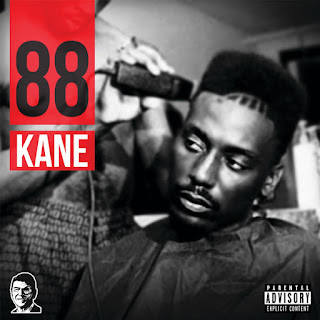 Los Angeles rhyme vets, Reagan Era Records make no bones about what era they represent. In new single “88 Kane” (Produced by King Dios) crew members Dios Negasi, Skrillz Dior and Halo reference golden age rhymes galore with their own gully street-flows over an ol’ school break-beat. The crew released the following mission statement about their formation.
“If you ask any true head when the greatest time in hip hop was they going to say 1986-1997. See in order to have the talent, creativity, hunger, drive, that the golden era greats have, you have had to have survived the Reagan Era! The streets were crazy then and the expression of it was too. Reagan Era Records was formed to bring that feeling back, when your beats had to knock and lyrical content was valued.”
In addition to the aforementioned members, Reagan Era Records also includes Sneek Rothstein, Dyverse, Lefty Barnes, Rello and Ike Burners. Many of these names are new alias from long-time emcees in the game share history and blood in common.Rothstein explains “many of us have kept rhyming in this modern age but we all came up during that golden age. So when that boom-bap style started to break through again, we just said, hell we’ve been doing this style all along, let’s clique up and go all-in.”“88 Kane” is the first taste of the self-titled full-length album to drop in late November.
Instagram: https://www.instagram.com/officialreaganerarecords/
REAGAN ERA RECORDS · 88 KANE /DIOS NEGASI, SKRILLZ DIOR, HALO PRODUCED BY KING DIOS