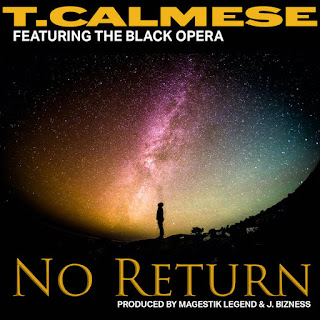 Formerly known as Illite of the Subterraneous Crew (OneBeLo et al), Detroit native emcee T. Calmese has released several solo mixtapes, as well as collaborative albums with fellow Michigan emcees Octane (currently known as Ro Spit) and Vaughan T (of Athletic Mic League). As the newest addition to the creative counter-culture collective and record label known as The Black Opera, Calmese enters a new phase of artistic reinvention today (11/10/2020) with the announcement of his forthcoming album Time And Time Again, and shares the project's lead single "No Return". Featuring founding TBO members Jamall Bufford and Magestik Legend, with production from Magestik Legend and J. Bizness, "No Return" follows last year's "Timing is $$$" and a string of loose singles.
Due out exclusively via Bandcamp on November 27th, Time And Time Again will serve as Calmese's full-length debut album.
More Info:Facebook | Twitter | Instagram