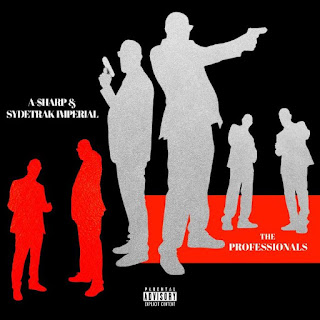 Everyone is given three crucial choices in life: work hard, starve or work harder.  When it comes to New Jersey hip-hop duo, The Professionals, Newark's A-$harp (one half of Crimson Twins w/ Wes Nihil) & Sydetrak Imperial (one half of Age Of Extinction w/ Fatboi Sharif) join forces to work harder than the rest while moving full speed ahead down the road of mastery in pursuit of a better tomorrow.  One is considered a master after dedicating more than 10,000 hours towards perfecting their craft, which The Professionals have successfully exceeded together while dedicating over 7 years to the creation of their upcoming full-length album debut.
"The Professionals" is the visual premiere of A-$harp & Sydetrak Imperial's self-titled single and first installment of a three-part trilogy directed by award-winning cinematographer, Serringe, which is said to be nod to Jay-Z's world-renowned short film, "The Streets Is Watching".  The sinister A-$harp produced soundscape paired with Serringe's ingenious camera work immediately sets the stage for the video's message and one of life's most important lessons: trust nobody.  Sydetrak follows suit seamlessly matching the track's eerie production while verbally navigating the viewer through an infamous double cross, where The Professionals' 10,000 hours to mastery finds them on the right side of this epic bloodbath.
Sydetrak spoke about "The Professionals" video, stating, "We chose our group's name and project based on where we are at in life. We have had a lot of fun creating music in the past, but it was time to level up and go pro. We are no longer young knuckleheads on the block, we put that work in and achieved mastery. We are now professionals." A-$harp added, "As a team we have learned so many lessons of the music industry the hard way. The most important lesson is to trust no one. This video is a reminder of that."
"The Professionals" is featured on A-$harp & Sydetrak Imperial's self-titled full length album which is slated for a December 2020 release that will include limited edition physicals and merch. Stay tuned for more details.
Twitter Handles:A-$harp-  @ASharp79Sydetrak Imperial-  @OldManSydeSerringe-  @Element_TreeInstagram Handles:A-$harp-  @ASharp79Sydetrak Imperial-  @The5StarNinjaSerringe-  @Serringe