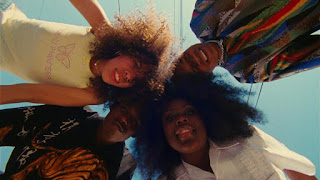 Michael Kiwanuka shares the video for his song "Interlude (Loving The People)" from his acclaimed third studio album, KIWANUKA. The album won the 2020 Mercury Prize and has been nominated for Best Rock Album for the 2021 Grammy Awards. The track opens with an excerpt of a speech by the US Civil Rights leader John Robert Lewis for a documentary in relation to the sit-in movement for civil rights in the South (1960) before Michael and his band spin-off into a rich musical world of their own making.
A standout track from a record that's positively littered with them is Interlude (Loving The People). It is shared with a video directed by acclaimed US filmmaker Phillip Youmans who took home the Founders Prize at the Tribeca Film Festival in 2019 for his directorial debut. It's a vivid, luminous, and carefree accompaniment to the track. Youmans reflected on the making of the video, explaining: "Listening to Interlude (Loving the People) feels like sunshine on my skin. This film is an escapist trip where young black people revel in the psychedelic experience. For me, Loving the People is about the adrenaline of unconfined love and joy, a celebration of black youth and imagination."
2019's KIWANUKA LP was released to a wealth of critical acclaim, heralding the next level for a musician already well-adjusted to releasing genre-defying, peerless psychedelic soul music. various outlets such as The New York Times, NPR, Rolling Stone, Pitchfork, The FADER, Associated Press, Vibe, HypeBeast, Magnet, INTERVIEW, Billboard,The Economist, The Nation, Flaunt, Sound Opinions, BUST, PopMatters, American Songwriter, PASTE, Relix, The Guardian Clash, GQ, NME and more, also landing spots on many best of 2019 lists. He took the record out across Europe, saving the US and UK runs for the Spring. Except the Spring touring commitments never came as the global pandemic took hold, with not only his first sold-out UK tour pushed back, but the one after too. Sold out nights at Brixton and Alexandra Palace are on hold for Spring and Autumn 2021, tours that already promise so much from such a mesmerizing record.  Michael recently delivered a captivating performance for NPR's Tiny Desk At Home series, watch here.
Stay tuned for more to come in 2021 for Michael Kiwanuka.
LISTEN TO KIWANUKA
https://smarturl.it/michaelkiwanukaalbum
FOLLOW MICHAEL KIWANUKA
INSTAGRAM
TWITTER
APPLE
SPOTIFY
SOUNDCLOUD