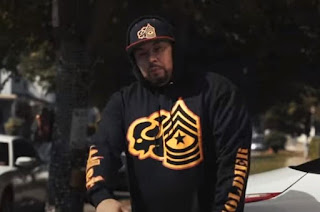 Buffalo, NY emcee J. Snow has just dropped a new video for his single “You Ain’t Hood.” Directed by Earthbound Films the visuals shows Snow, his crew and his family posted up in his home turf of the West Side of Buffalo. Speaking on the inspiration for the joint Snow said “I made it for the true hood-heads, I decided to make a joint speaking on all the things that really go down there. People outside of the hood who hear it probably think we’re talking in code. Also people always have this negative image when I say hood and while it’s true that you usually don’t see large gatherings there unless someone passes, this video was a good excuse to celebrate with all of our loved one’s in the place we came from.”

“You Ain’t Hood” is a leak from his forthcoming full-length album, Rundown Town to drop in early 2021.

While J. Snow has been active in the game for many years, he had to fall back for a while to raise a family. However in 2018 he released what can be considered his first official project, Work Ethics Vol. 1 All Work No Play, which is now available via his Good Money Affiliates label (link below).Instagram: HereMore Info: Here