Arichussettes Featuring ETO and Dj. Slipwax - Spit Nothing But Street 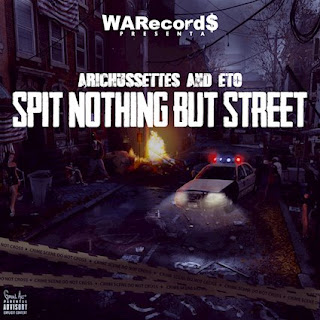 Mixed and Mastered by:  The Arcitype at The Bridge Sound and Studio

Performed by : Arichussettes and ETO

Utilizing all of the techniques of an old school hip hop track—such as mixing in a funk/soul instrumental intro to including the percussive and rhythmic scratches of a vinyl record—"Spit Nothing But Street" featuring ETO, by Arichussettes, drops like a sonic time bomb. Ryan Cooper a.k.a. Arichussettes starts the song off right with his gruff rhyme accompanied by a heavy bassline akin to something found in Public Enemy’s “Fear of a Black Planet.”

The switching between MCs, Arichussettes and ETO respectively, adds a layer of mystery to the track as they evoke a call and answer response. “Spit Nothing But Street" featuring ETO, may have been recorded in 2020 but it sounds like something straight out of the early ‘90s hip hop scene.

Arichussettes got into hip hop around the age of five when he found a walkman in a Mesa Arizona park. He became influenced by west coast rap and then east coast after moving to Massachusetts. Soon after he started freestyling at house parties and was encouraged to try his hand at the rap game. He combined his two home states to form his name and began creating buzz around his sounds as he played shows, opening for artists such as Onyx, Snowgoons, and Army of the Pharaohs.

Soon after he signed a deal with Disturbia Music Group and released Arichussettes for President. He then joined the underground rap group Sewaside Squad and signed another deal with the Latin company WARecords.

Arichussettes plans to release another single “Salute You,” featuring Rockness Monstah of Heltah Skeltah in February.