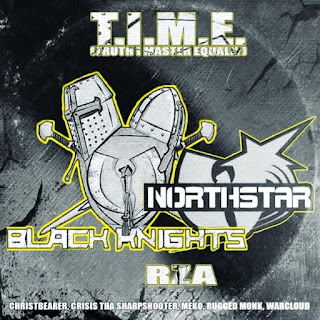 California's Black Knights of the Northstar were discovered in 1997 by Wu-Tang Clan's founder and leader, RZA, becoming the first group from the West Coast to be signed to Wu-Tang Records.  The group later separated in 2000 into two groups: Black Knights (Crisis, Rugged Monk, Holocaust and Doc Doom) and Northstar (Christ Bearer and Meko The Pharaoh), while still continuing to work closely together over the years.  These West Coast Killa Beez have made key appearances on some of Wu-Tang's classic RIAA certified Platinum and Gold releases "Wu-Tang Killa Beez: The Swarm", "The Sting", all of RZA's "Bobby Digital" projects, and numerous RZA film soundtracks including "Ghost Dog" and "Afro Samurai".
Today, for the first time, they have reunited to record their debut collective album, "Norhstar on the Blackest Night" as RZA envisioned when he signed them over 20 years ago.  This debut also introduces a new member, West London's Shaka Amazulu The 7th and features guest appearances from RZA, Ghostface Killah, Cappadonna, Killarmy and Kurupt.
The Black Knights of the Northstar's highly anticipated reunion is spearheaded by their RZA introduced single/video, "T.I.M.E. (Truth I Master Equally)", which delivers the addictive raw Wu-Tang energy the entire world got hooked to in the '90s.  The Skarekrow produced head-nodder invokes a spiritual-like trance while each word wizard takes turns spitting their righteous spell.  The skillfully animated visual imagines a sinister cinema coming to life, jumping out of the silver screen to invade real life.  When speaking about "T.I.M.E.", the California collective unitedly declared, "Timing is everything! It's our time. It's time for the truth."
The "Northstar on the Darkest Night" LP is available now on CD and all major digital/streaming platforms via Black Stone Of Mecca Records.  Limited edition double vinyl (featuring two separate vinyl jackets and covers) can be purchased at https://blackknightsofthenorthstar.bandcamp.com/album/northstar-on-the-blackest-night and other physical merch including CDs  at http://northstarwu.shop while supplies last.